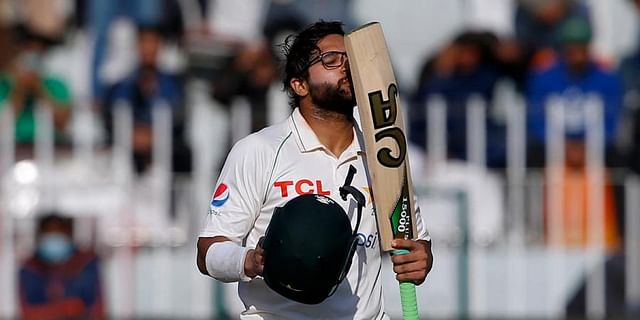 Rawalpindi: Opening batter Imam-ul-Haq returned to test cricket after 27 months with a gritty 92 not out Friday and provided Pakistan with a solid start in its first home test against Australia in 24 years.

Imam led Pakistan to a strong 171-1 at tea on the first day as Australia toiled hard for the sole wicket of opening batter Abdullah Shafique (44) on a typically slow subcontinent surface. Imam, a left-handed opener preferred over Shan Masood, shared a 105-run opening stand with Shafique on the grassless wicket at Pindi Cricket Stadium.

Azhar Ali (30 not out) and Imam combined in an unbroken stand of 66 runs in the second session as Australia tried all its bowling resources, including part-time spinners Travis Head and Marnus Labuschagne without success after Pakistan resumed after lunch on 105-1.

Skipper Babar Azam won the toss and made the call for Pakistan to bat first. Australia’s Mitchell Starc, Josh Hazlewood and skipper Pat Cummins struggled to make the new ball move. Even veteran offspinner Nathan Lyon (1-59) was ineffective until he dismissed Shafique in the penultimate over before lunch.

Shafique got beaten in the flight and tried to heave the offspinner over long off. He was brilliantly caught by a running Cummins. Lyon earlier extracted brief turn off the wicket but both openers dominated the spinner by using their feet and raised a century stand.

Lyon has bowled 19 overs in two sessions after being introduced within the first hour.

Imam, who last played a test match against Australia at Adelaide in December 2019, survived a close call for lbw in Starc’s third over as the visitors went for an unsuccessful television review and the replays suggested the ball would have went over the stumps.

Shafique also had a close call but Head dropped a difficult chance at leg slip in Lyon’s second over, a ball after the spinner was smacked for a straight six. Imam raised his half century by pulling Cummins to square leg boundary for a four and overtook his batting partner once Australia briefly applied the offspin of Head and Lyon.

Imam prospered further in the second session and has so far hit 12 boundaries and two sixes as Australia fast bowlers struggled to get the breakthrough. It’s the first time Australia has played a test match in Pakistan since 1998 due to concerns over security from several attacks in Pakistan.