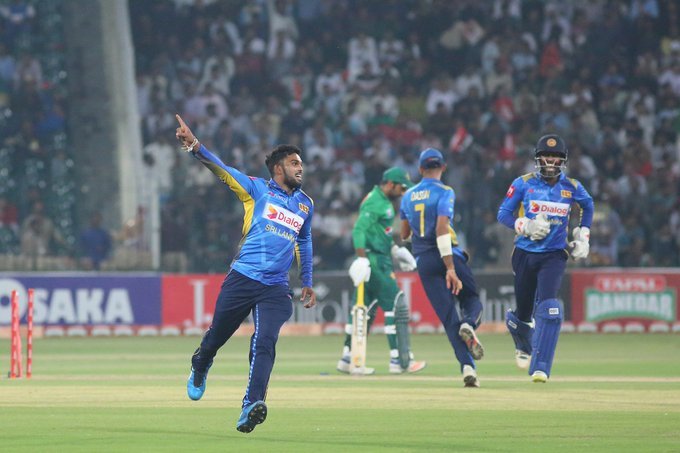 Lahore: Sri Lanka’s inexperienced team earned another emphatic 35-run victory over top-ranked Pakistan in the second Twenty20 for an unassailable 2-0 lead in the three-match series.

Bhanuka Rajapaksa, playing in only his second Twenty20, smashed 77 off 48 balls in Sri Lanka’s strong total of 182-6 after captain Dasun Shanaka won the toss and opted to bat.

Leg-spinner Wanindu Hasaranga (3-38) then took three wickets in four balls and Isuru Udana provided the perfect finish by grabbing 4-25 as Pakistan was bowled out for 147 in 19 overs.

Ten of Sri Lanka’s top players pulled out of the tour due to security concerns, including Twenty20 captain Lasith Malinga, but Sri Lanka’s second string surprised cricket pundits by outplaying the No. 1-ranked team in front of its home fans.

Imad Wasim top scored with 47 off 29 balls but his partnership of 75 with Asif Ali (29) was not enough to stop Sri Lanka from registering another convincing win.

The recalled Umar Akmal fell for golden duck for the second successive match while Ahmed Shehzad could score only 13 before both fell to Hasaranga’s brilliance inside the first 10 overs.

Earlier, the left-handed Rajapaksa hit six sixes and four boundaries and dominated a 94-run fourth-wicket stand with Shehan Jayasuriya, who made 34. Shanaka propelled Sri Lanka’s total beyond Pakistan’s reach by smashing 31 off 15 balls.

Pakistan’s poor ground fielding also let the team down as Rajapaksa and Jayasuirya both survived close run out chances early in their innings.

“We missed a couple of run-out opportunities that could have changed the game but they had a good partnership in the middle overs and we lost five wickets in the first 10 overs.”

Rajapaksa’s half century, described by captain Shanaka as a “masterclass,” put Pakistan’s bowlers under pressure as leg-spinner Shadab Khan conceded 38 runs before he had the left-hander caught in the deep in the 17th over.

Pakistan’s run-chase got off track early when Fakhar Zaman and Babar Azam dragged the ball back onto their stumps off seamers Kasun Rajitha and Pradeep, respectively.

Hasaranga had Shehzad’s leg stump uprooted before having Akmal lbw off the next delivery. A ball later, Sarfaraz left his team reeling at 52-5 when he played the leg-spinner’s googly back onto his stumps.

Imad and Asif fell behind the asking rate, which creeped up to 14 an over before Udana broke the stand by having Imad lbw off a fuller delivery and Pradeep polished off the tail with three quick wickets.

Sri Lanka won the first match by 64 runs and the final game of the series will be played on Wednesday.

It is the first time since Sri Lanka’s team bus was attacked in Lahore in 2009 that a foreign team is conducting a two-week tour of Pakistan.

Major teams have avoided the country since the ambush that killed eight people and injured several players.

Pakistani umpire passes away on ground in club tournament