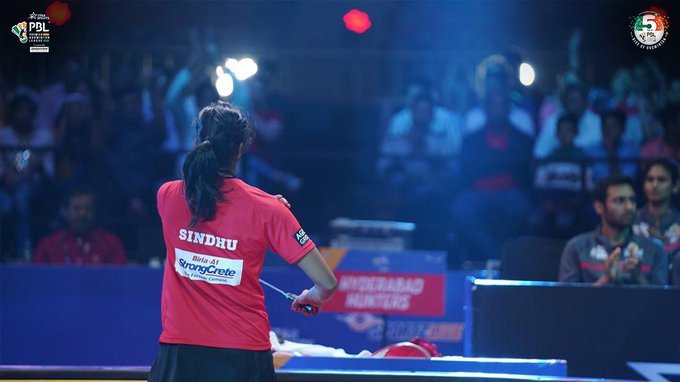 Hyderabad: World Champion PV Sindhu put up a masterclass to beat Shriyanshi Pardeshi in an all-Indian clash as Hyderabad Hunters notched up a thrilling 4-3 win over Mumbai Rockets in the fifth Premier Badminton League.

Languishing at the bottom of the table, Hyderabad finally had something to cheer about as Sindhu lead a recovery after the team was 0-3 behind at one stage against the sixth-placed Rockets.

Sindhu had come to this match on a two-match losing streak, having suffered a reversal of fortunes at the hands of Michelle Li and Tai Tzu Ying. However, this time the Hunters Trump made no mistake as she beat Shriyanshi 15-5, 15-10 in a clinical display.

The Mumbai ace has a 3-2 head-to-head record against World No. 42 Daren Liew on the BWF World Tour and he used all that experience against the Malaysian, whom he last beat at the Korea Open in November.

Showing all his rhythm and range, the Mumbai Trump was able to register a quickfire 15-8, 15-13 win.

Sindhu then took the court and claimed a straight game win to start Hyderabad’s recovery.

In the first game, it was a one-way traffic as Pardeshi found it difficult to counter Sindhu’s pace and power.

In the second game, however, the Mumbai player was able to give a better account of herself. By speeding up the shuttle, she was able to put an end to Sindhu’s domination.

As Sindhu fumbled at the net, Pardeshi was just two points away from the World No. 6 at 9-11 before the Hyderabad shuttler stopped her momentum and wrapped up the match.

Sindhu, Mary Kom among nominees for BBC Sportswoman of the year award

Under-pressure Saina needs few wins to be in fray for Olympics berth: Kashyap