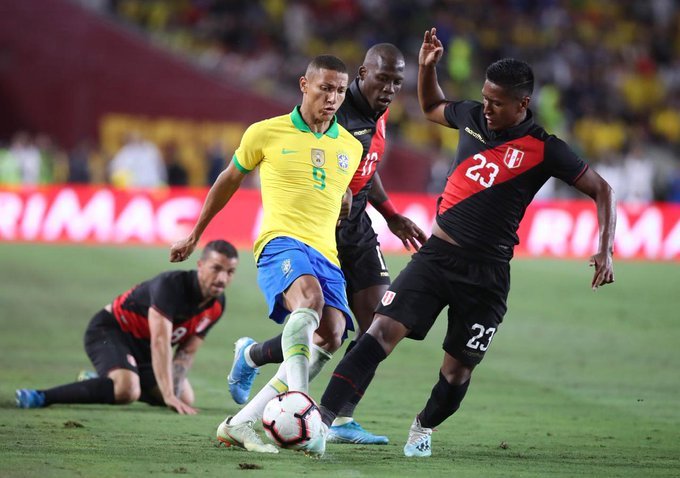 Brazil had beaten Peru to win the 2019 Copa America.

Los Angeles: Peru grabbed a slice of revenge for their loss to Brazil in the Copa America final, defeating the five-time World Cup winners 1-0 in a friendly in Los Angeles.

A headed goal from Argentina-based defender Luis Abram was enough to give Peru a hard-fought win over the Brazilians on Tuesday.sports news headlines

Brazil, who defeated Peru 3-1 in the final of the Copa America in Rio de Janeiro in July, never got going to the disappointment of a 32,287 crowd at the Los Angeles Memorial Coliseum.

The defeat brought an end to Brazil’s 17-game winning streak, a run which started with a victory over the United States just over a year ago.sports news headlines

Inter Milan striker Martinez scored in the 17th, 22nd and 39th minutes at the Alamodome to give Argentina a deserved win over a lacklustre Mexico team on Tuesday.

Paris Saint-Germain midfielder Leandro Paredes scored Argentina’s other goal from the penalty spot after 33 minutes as the South American giants romped into a 4-0 lead at halftime.

🔥 Lautaro Martinez has become the 1st player to score 3⃣ in an @Argentina-Mexico game since Guillermo Stabile in 1930 – & he did it in the 1st half at the Alamodome❕ pic.twitter.com/6cwNx429MV

But it was the 22-year-old Martinez who grabbed the headlines with a clinical exhibition of finishing which took his international goals tally to nine in 13 appearances.

Martinez opened the scoring in the 17th minute, picking the ball up deep in Mexican territory before twisting and turning past several defenders and firing low past Guillermo Ochoa.

Martinez bagged his second five minutes later, with River Plate’s Exequiel Palacios punishing sloppy play in the Mexican defence to send the Inter Milan striker through on goal to finish for 2-0.

A disastrous start for Mexico got worse shortly after the half hour mark when Carlos Salcedo was adjudged to have handled in the area to concede a penalty. Paredes duly stepped up to convert to give Argentina a 3-0 lead.

Martinez completed his hat-trick six minutes from half-time, again capitalising on lackadaisical Mexican defending to dart in and shoot past Ochoa.