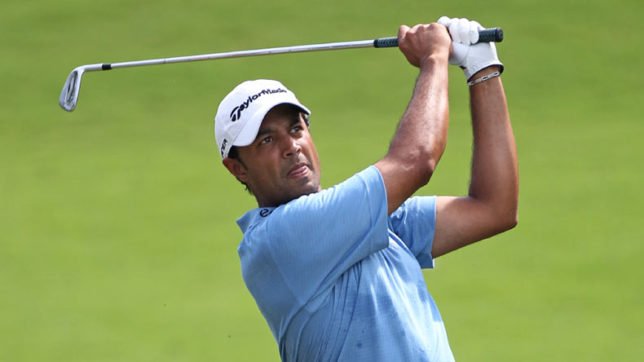 Puerto Rico: India’s veteran star Arjun Atwal, who has been preoccupied with his father’s health issues, will see action for the first time in nearly four months when he tees up at the Puerto Rico Open starting on Thursday.

He will be joined by Anirban Lahiri, who last featured on the PGA Tour three weeks ago at the Farmers Insurance Open. The two last played at the same event in Bermuda, a holiday isle like Puerto Rico.

Atwal’s father, popularly called ‘Bindi’, has been a major influence in his golf career. The senior Atwal has rarely missed a big appearance by his son, including at the majors.

Now Atwal will be playing for him, as also his friend, Tiger Woods, who suffered a serious car crash on Tuesday and underwent surgery after suffering comminuted open fractures to the upper and lower sections of his right leg, along with significant trauma to his ankle.
Ahead of his first tournament of 2021, Atwal, who is India’s lone winner on the PGA Tour, said, “It’s obviously a lot of rest, but personally we’re going through some (difficult) stuff with my family. My dad’s been fighting two types of cancer.

“He’s getting his treatment back in India now. He was with us for the last five months in Orlando. He’s doing better. So I didn’t really touch my clubs for a couple of months, maybe three months after Bermuda, and just started practicing,” he added.

He is looking physically fit after changing his lifestyle and undertaking a new fitness regime last year. “I quit alcohol completely. It’s so good. I realized I’m going to be 48 next month and I was getting to the point where my nerves weren’t quite as good around the greens. And I had seen some of my friends maybe my age or slightly older struggle with the same thing, so I figured I would just try it. As a result, I lost weight and I started working out and just started to feel better.

“I’ve got this trainer, he’s like a physical therapist and a trainer. With all my aches and pains he gets me sorted, gets me going for the day. It’s not a lot of lifts, a lot of weight training, it’s a lot more with flexibility and strength with bands,” added Atwal, whose career has been blighted by back injuries.

Lahiri, who like Atwal is a former Asian No. 1, was unable to get a start in the Waste Management Phoenix Open after losing in a play-off in the Monday qualifiers and did not gain entry into last week’s The Genesis Invitational.

Soon after his last appearance at Torrey Pines, he said, “My game seems to be fine; I just need to get four good rounds and not drop those bogeys and doubles. Hopefully, it is ironed out.”
While Atwal last saw PGA TOUR action in October, Indo-Swede Daniel Chopra, a two-time winner on the TOUR and a popular figure in Indian golf, last teed up at the Corales Puntacana Championship in September 2020.
Lahiri is paired with Chopra and Branden Grace of South Africa in the morning, while Atwal plays with Scott Brown and Shawn Stefani in the afternoon wave.
This week’s Puerto Rico field includes a few established golfers including Englishmen Matt Wallace and Ian Poulter, who are ranked No. 55 and 59 respectively on the Official World Golf Ranking.

There are other young players on the rise including Will Gordon, Joohyung Kim, Davis Riley, Justin Suh, Kristoffer Ventura and Brandon Wu who join experienced stars including major champions Padraig Harrington and Lucas Glover.

Viktor Hovland won the tournament a year ago and broke the “curse” of Puerto Rico by winning a second TOUR tournament outside of Puerto Rico. This week, Hovland is playing the World Golf Championships-Workday Champions at The Concession.

Atwal, who won the 2010 Wyndham Championship, is treating the Puerto Rico Open with his full attention despite being the opposite of a World Golf Championships this week.
“I look at it as just as important as any other tournament on the PGA TOUR. The prize money might not be the same, but you still get a two-year exemption and I believe now you get in the Masters as well. So all the perks are the same. Even when I was playing in World Golf Championships back in the day, I considered all these tournaments the same, and I still do. I don’t think you could ask anybody here or anybody at the World Golf Championships, they all consider every tournament they play in just as important,” he said.
As he prepares to turn 48 next month, he is encouraged to see fellow veterans Stewart Cink and Brian Gay winning on TOUR this season.

“B.G. (Gay) is a member at my course, at Isleworth in Orlando, and I see him practically every day, and he’s older and he’s my inspiration right now because just for him to win Bermuda was so cool to watch. He’s such a good guy. And same for Stewart, he’s such a nice guy. And they’re all my age so it gives me kind of some encouragement. Hopefully, I can get my butt in gear and get going.”