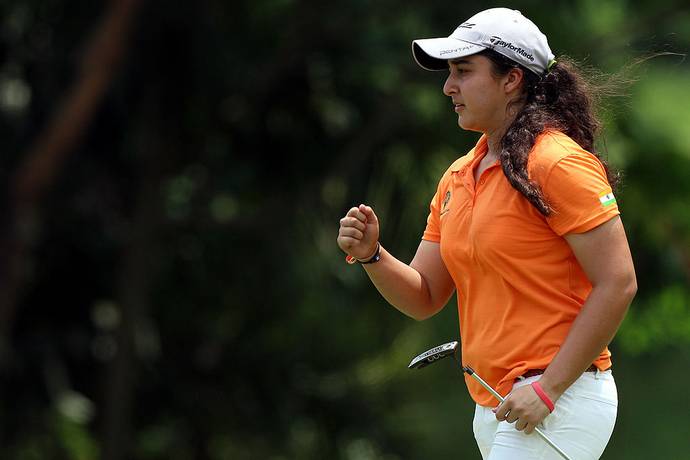 Pune: Amateur Pranavi Urs and last year’s most successful player Ridhima Dilawari emerged joint leaders after carding a one-under 70 each on the opening day of the first Leg of the Hero Women’s Pro Golf Tour 2020.

Urs and Dilawari were the only ones to shoot sub-par scores at the Par-72 Poona Golf Club course.

They led by two shots over the fancied Diksha Dagar (72), who finished bogey-bogey after being two-under through 16 holes.

Urs, who has a win on the pro tour while still being an amateur in 2018, played steady after starting with a bogey. She birdied the third, eighth and 18th but dropped a shot on the 17th.

Dilawari hit by bogeys on seventh and ninth turned in two over but birdies on 12th, 15th and 18th ensured a 70.

Dagar was one-under after 16 with two birdies against bogey when she came to the 17th tee, but dropped a shot on both the closing holes for a 72.

Three players, Saaniya Sharma, Afshan Fatima and Amandeep Drall carded 73 each and were Tied-fourth. Drall’s card was spoilt by a late double bogey on Par-4 16th.

Neha Tripathi (74) was seventh, while Khushi Khanijau, Vani Kapoor and Ananya Datar were Tied-eighth with rounds of 75 each.

The Hero Order of Merit winner for 2019, Gaurika Bishnoi, was lying Tied-11th with a round of five-over 76 with four bogeys, a double bogey and just one birdie.