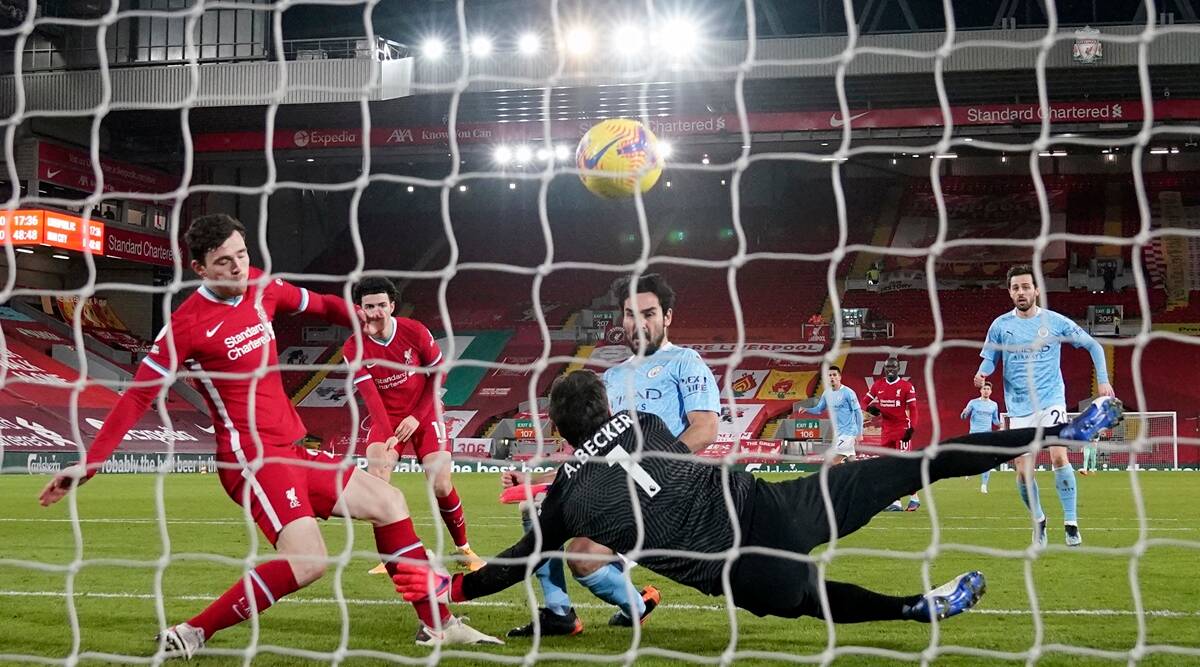 New Delhi: The fireworks being set off behind the Kop provided a flashback to last season’s Premier League trophy celebrations. But little on the Anfield pitch suggested these were the champions in action.

Jürgen Klopp’s side appears a faded force preparing to relinquish the title, highly possibly to Manchester City after being beaten 4-1 by the leaders on Sunday.

After going 68 games unbeaten on home soil, Liverpool has now lost three in a row for the first time in 58 years.

And it’s City with a five-point lead. Not over Liverpool but Manchester United — and with a game in hand. Liverpool has slipped 10 points off the pace in a league it dominated to win by 18 points last season and led last month, now just clinging onto the fourth Champions League place.

Leicester moved three points ahead of Liverpool in third after drawing 0-0 with Wolverhampton. Chelsea is within a point of Liverpool after maintaining the revival under Thomas Tuchel with a 2-1 victory at Sheffield United. And Tottenham is only four points from fourth place after ending a three-game losing run by beating West Bromwich 2-0.

On a freezing day across England, Klopp could only figure that the icy conditions were to blame for a blundering performance by goalkeeper Alisson Becker that proved so costly.

“Maybe he had cold feet?” Klopp said. “It sounds funny but it could be.”

Liverpool had been spared falling behind in the first half when Ilkay Gundogan struck a penalty into the empty Kop. Gundogan did find the net at the other end four minutes into the second half when Phil Foden’s close-range shot was parried by Alisson into his path.

Liverpool needed energizing. Perhaps that’s why the fans shut out of the stadium during the coronavirus pandemic lit up the skies with fireworks, seven months after they celebrated the end of a 30-year title drought with pyrotechnics here.

And Mohamed Salah gave a route back into the game by doing what Gundogan couldn’t do by scoring a penalty in front of the Kop after being brought down by Ruben Dias.

The team’s top scorer played his part. But the usually reliable barrier in the goal did not.

Alisson cleared directly to Phil Foden, who set up Gundogan to score into an empty net for 2-1.

Another lapse followed. City midfielder Bernardo Silva intercepted a feeble clearance by Alisson and lifted the ball over the goalkeeper for Raheem Sterling to head over the line.

“These two goals were a killer,” Klopp said. “Tonight it was decisive. That’s OK as he (has) saved our lives I don’t know how often. He is absolutely a world class goalie. Something went wrong but we have to take that.”

It was the power of Foden’s shot that beat Alisson rather than any mistake that allowed City to complete its first victory at Anfield since 2003.

“Hopefully next time we can do a similar performance with spectators because Anfield with people in and without is different,” Guardiola said. “I could imagine at 1-1 how much they could influence the players.

“But especially when we missed the penalty and conceded a goal, how good we reacted. Everyone took a step forward. Ilkay and Sterling made an incredible game.”

It extended City’s unbeaten run in all competitions to 14 matches to turn the season around. It was only 35 days earlier that a 3-1 win at Chelsea took City to fifth, four points behind then-leader Liverpool with a game in hand.

City’s victory at Stamford Bridge contributed to Frank Lampard being fired two weeks ago. Since Tuchel took charge, the west London club has now won three, drawn once and is yet to concede from an opposition player.

It was only Antonio Rüdiger’s own-goal that allowed Sheffield United to cancel out Mason Mount’s first-half opener at Bramall Lane. Jorginho’s 58th-minute penalty clinched the win over the last-place team after Timo Werner was brought down by goalkeeper Aaron Ramsdale.

“For myself again no goals, but it’s good to see that I can help the team with other things at the moment,” said Werner, who hasn’t scored in 14 league games. “I’m happy when we win and if I can make two assists it’s also good.”

Harry Kane has none of Werner’s difficulties in scoring. The challenge is staying fit but the striker made a rapid recovery from ankle injuries after 10 days and scored the opener against relegation-threatened West Brom with a low finish.

It was his 13th goal of the league campaign and he also fed Lucas Moura to tee up Son Heung-min to double the lead.

“The team depends a lot on him, we can’t hide that,” Tottenham manager Jose Mourinho said of Kane. “It’s the goals he can score, the assists he can make, the link play he has, that personality that players like that can have and he is always an important influence for us.”