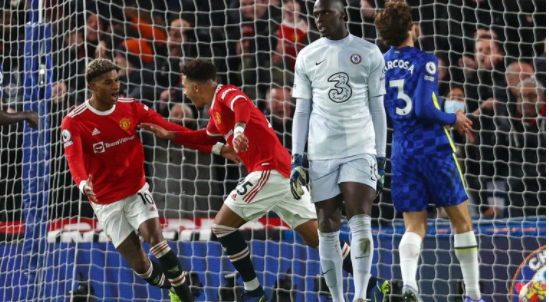 New Delhi: Ballon d’Or contender Jorginho made amends for an error leading to Manchester United’s goal with an equalizing penalty for Chelsea in a 1-1 draw in the Premier League on Sunday.

Jorginho was around the halfway line when he failed to control Bruno Fernandes’ hooked clearance from the edge of the United penalty area five minutes into the second half. Jadon Sancho nipped in to seize possession and race through on goal before netting his first Premier League goal since his offseason arrival.

The chance for Jorginho to come to Chelsea’s rescue came when Aaron Wan-Bissaka caught the back of Thiago Silva’s leg when clearing the ball.

Jorginho, who missed a penalty when Italy failed to qualify for the World Cup automatically earlier this month, found the target this time — sending goalkeeper David de Gea the wrong way in the 69th minute.

Jorginho will discover on Monday whether he has won the Ballon d’Or — European football’s top individual prize.

A week after Ole Gunnar Solskjaer was fired by United, Michael Carrick has a win — at Villarreal in the Champions League — and this draw against the Premier League leaders from his matches as interim caretaker manager.

After losing five of its last seven league games under Solskjaer, United moved within five points of the fourth Champions League place — a welcome platform for Ralf Rangnick to build on. The German is set to take charge until the end of the season after a work permit has been secured.

Champions Manchester City overcame heavy snow and a battling West Ham side to claim a hard-fought 2-1 victory in the Premier League on Sunday.

Ilkay Gundogan tapped home after 33 minutes and Fernandinho added a late second at the Etihad Stadium as the champions kept up the pressure at the top of the Premier League.

West Ham pulled one back through Manuel Lanzini in stoppage time but it would prove no more than a consolation.

James Maddison inspired Leicester to a 4-2 win over Watford in the Premier League to ruin Claudio Ranieri’s return on Sunday.

The England international grabbed a goal and provided two assists for Jamie Vardy as the Foxes closed the gap to the top six amid blizzard conditions.

Ivan Toney gave Brentford a 1-0 victory over Everton that extended the winless run for Rafa Benitez’s side to seven matches on Sunday.

Toney previously played under Benitez at Newcastle but struggled for playing time. His penalty in the 24th minute came after Andros Townsend’s high boot caught Frank Onyeka in the face.

Brentford claimed a first home league win since the opening day of the season against Arsenal in August to move up to 12th. Everton is two places lower in the 20-team standings.