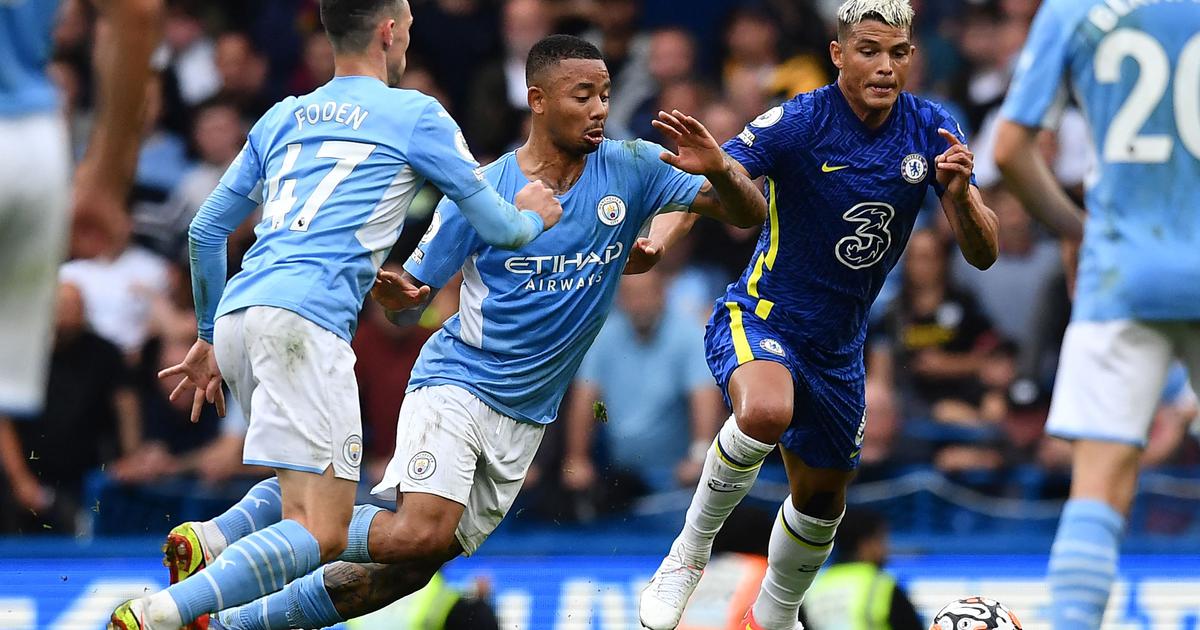 New Delhi: Manchester City took revenge for their Champions League final loss to Chelsea and secured a big three points in the early running for the Premier League title with a 1-0 win at Stamford Bridge.

Gabriel Jesus’ deflected effort eight minutes into the second-half separated the sides, but City should have been more convincing winners as they laid down a marker after losing to Chelsea three times towards the end of last season.

The most painful of those came in Porto as Chelsea lifted the Champions League to deny City the crowning glory of the club’s rise since an Abu Dhabi takeover in 2008.

Pep Guardiola was fiercely criticised for his decision to start without a natural holding midfielder when the sides last met in May.

That error was rectified with the return of Rodri and the Spaniard’s poise helped Guardiola’s men completely dominate possesion.

However, City’s lack of a prolific goalscorer to turn that dominance into goals was again exposed.

Guardiola bemoaned on Friday that his side lack a “weapon” of the likes of Chelsea’s record signing Romelu Lukaku or Manchester United’s Cristiano Ronaldo to decide games inside the box.

Instead, City have to rely on the collective of a richly assembled squad of creative midfielders as Guardiola named Kevin De Bruyne, Phil Foden, Jack Grealish and Bernardo Silva in his starting line-up.

For all of City’s patient probing, it was when they took a pot shot from long-range that they looked most likely to break the deadlock before the break.

Rodri’s piledriver would have tested Edouard Mendy but for a deflection that took it over before De Bruyne also fired over when the Belgian found a rare pocket of space.

Rather than stepping into the shoes of the departed Sergio Aguero, Jesus has found himself deployed as a right winger so far this season.

The Brazilian should have done better with City’s best chance of the first-half when he sliced well wide after controlling Silva’s cross to the far post.

However, Jesus got the break City’s performance deserved to open the scoring on 53 minutes as his effort deflected off Jorginho to leave Mendy flat-footed.

That was just the 15th Premier League goal Chelsea had conceded in 25 games since Tuchel took charge.

But there could have been plenty more but for a combination of wasteful finishing and some brilliant last-ditch defending.

City’s £100 million summer splash on Grealish rather than a goalscorer has been questioned, but the England international came to life after the break and only a stunning save by Mendy low to his left prevented the visitors quickly doubling their lead.

Jesus’ lack of a killer instinct was again exposed when he appeared to have an open goal after another dangerous Grealish burst, but his low finish allowed international teammate Thiago Silva to clear off the line.

Tuchel’s response was to send on Kai Havertz, the hero of Porto with the only goal, but the German was well offside when he teed up Lukaku for a tap in.

Chances continued to come and go the other end as Grealish was denied again by Mendy when clean through.

But the Premier League champions’ profligacy was not punished and United’s shock 1-0 home defeat to Aston Villa capped a stunning Saturday for City.

Guardiola’s side move level on 13 points with Chelsea, United and leaders Liverpool, who face Brentford later.

The Portuguese midfielder blasted his 93rd-minute spot-kick over the bar minutes after Kortney Hause’s late headed goal, which earned Villa their first win against United since December 2009.

United drew a blank for the first time this season despite boasting the league’s best attacking record and a star-studded line-up featuring Cristiano Ronaldo, Fernandes, Paul Pogba and Mason Greenwood.

United have lost three of their past four matches in all competitions after exiting the League Cup on Wednesday and conceding a late winner in their Champions League opener at Young Boys the week before.

The visitors were guilty of wasting several gilt-edged opportunities but were eventually rewarded for their enterprise in a frantic finale.

Hause beat Cavani at the near post at a corner to give Villa the lead in the 88th minute before conceding a penalty for handling a Cavani header.

But Fernandes – on spot-kick duty ahead of Ronaldo – missed in a dramatic finish to the game.

Defender Matt Targett squandered Villa’s first clear-cut chance of the game when he blazed over at the back post in the 16th minute.

Lingard’s misplaced back pass cost United dear in the Champions League against Young Boys and Harry Maguire almost made the same mistake at Old Trafford.

However, Villa striker Ollie Watkins’s shot was too close to the Spaniard.

Ezri Konsa was the next Villa player to spurn a glorious chance as he missed the target with a header from six yards.

Visiting goalkeeper Emiliano Martinez was called into action to deny Greenwood in the second half but the away side continued to have the upper hand.

Watkins drew another fine save from De Gea and young midfielder Jacob Ramsey lacked composure in front of goal as Villa appeared to have missed their chance to claim a rare Old Trafford win before the dramatic denouement.