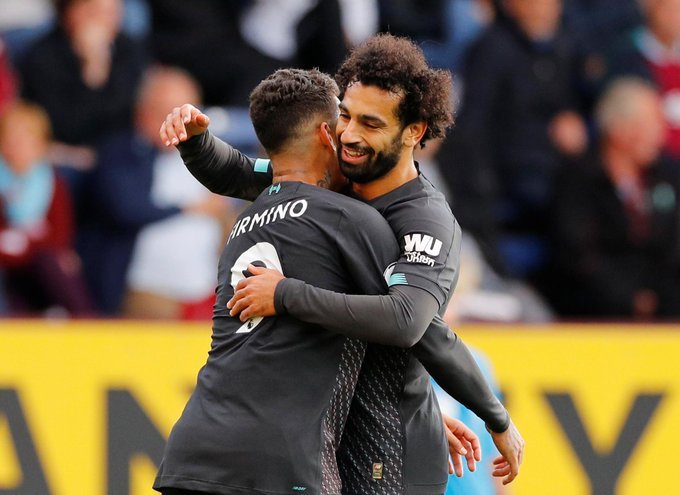 Liverpool are the reigning European champions.

London: Liverpool beat Burnley 3-0 at Turf Moor to record a club-record 13th consecutive league victory and return to the top of the table.

Manchester City are nipping at their heels though after coasting to a routine 4-0 home win — a Sergio Aguero double helping Pep Guardiola’s side maintain their unbeaten run dating back to January.

The Reds took the lead 33 minutes in when Trent Alexander-Arnold’s cross hit Chris Wood and looped into the net.

Liverpool have not lost any of the last 3️⃣3️⃣ #PL matches in which Sadio Mane has found the net (W29 D4 L0)#BURLIV pic.twitter.com/RooIvplTG1

Sadio Mane doubled their advantage four minutes later, finishing calmly having been picked out by Roberto Firmino after Ben Mee’s pass was intercepted.

The win makes Liverpool only the fifth team to win their opening four Premier League matches of consecutive seasons and moves them to 12 points, two ahead of Manchester City.

🏠 @aguerosergiokun has scored 9️⃣9️⃣ #PL goals at the Etihad – only Henry at Highbury (114) & Rooney at Old Trafford (101) have scored more at a single venue#MCIBHA pic.twitter.com/RB0ZW1jCZK

Man United dropped points for the third time in the first four Premier League games of the season as they were held 1-1 by 10-man Southampton at St. Mary’s.

Daniel James’s fine form since his move from Swansea continued as he fired United into the lead on 10 minutes.

But the defensive problems that blighted the end of Ole Gunnar Solskjaer’s first season in charge are still to be resolved by the Norwegian and Jannik Vestergaard headed home Southampton’s equaliser after halftime.

A last-minute own goal from Kurt Zouma helped Sheffield United stun Chelsea and earn a point as they fought back to draw 2-2 at Stamford Bridge.

Chelsea went ahead on 19 minutes when Tammy Abraham followed up goalkeeper Dean Henderson’s save to finish from close range.

Two minutes before the break, Frank Lampard’s side doubled their lead as Abraham took advantage of another defensive mix-up to score his second.

Tammy Abraham is the first Englishman to score at least 2 goals in consecutive #PL appearances for @ChelseaFC since Frank Lampard in January 2010#CHESHU pic.twitter.com/5ZfTR17aw8

Callum Robinson pulled a goal back for the Blades less than a minute after half-time when he converted a cut-back from Enda Stevens.

Sheff Utd levelled in the last minute of normal time after a dangerous cross from Robinson went in off Zouma to deny Lampard a first home win as Chelsea head coach.

The Blades are eighth on five points, a place and point above Chelsea.

AIFF actions could lead to civil death of I-League clubs