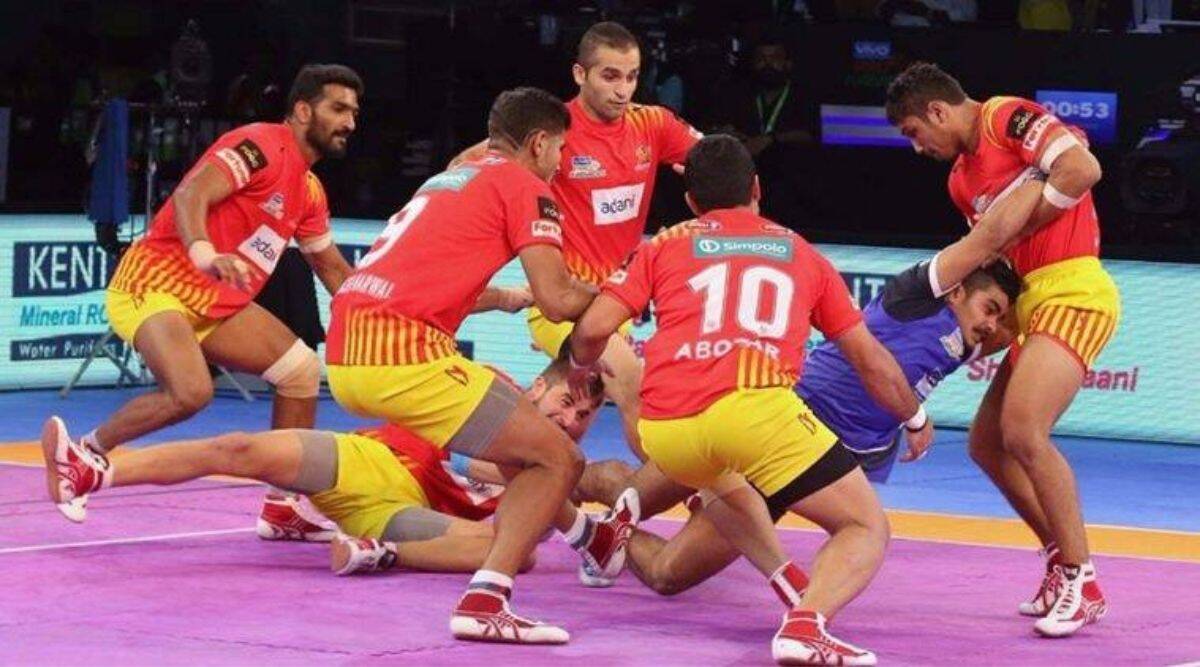 Bengaluru: Arjun Deshwal starred for Jaipur Pink Panthers as they beat UP Yoddha 32-29 in match 16 of Pro Kabaddi League, here on Monday. The young raider, who joined the Pink Panthers after the auctions from U Mumba, scored 11 points for Jaipur, who also saw their captain Deepak Hooda contribute important nine points.

It was yet another disappointing night for Pardeep Narwal who scored just 3 raid points from 12 attempts.

The match started with Jaipur on the front foot. The season 1 champions, under the leadership of captain Deepak Hooda, kept picking up solid raid points while ensuring UP’s Pardeep Narwal stayed on the bench. Arjun Deshwal complimented Deepak Hooda with five raid points in the first half as the Pink Panthers clinched their first all-out with three minutes remaining in the half to open an 8-point lead.

Pardeep Narwal’s lack of raid points became a big concern for UP Yoddha, who had paid Rs 1.65 crore at the PKL auctions to lure him. But Rohit Tomar kept the UP raiding unit alive while the corner defenders Nitesh Kumar and Sumit slowly started getting their act together. They reduced Jaipur’s lead to four points with 10 minutes left in the match. Arjun Deshwal continued his good work for Jaipur as he made three Super 10s in three matches.

With six minutes remaining Jaipur had a seven-point lead but in Rohit Tomar, UP found a hero. The lanky all-rounder scored points at both ends to ensure Jaipur remained at a striking distance with five minutes left on the clock. Pardeep Narwal, meanwhile, could not find form in the dying minutes.

Despite great raiding by Rohit and Surender Gill, the UP defence could not nail down Deepak Hooda in the final raid which allowed Jaipur to win the match.

Tamil Thaliavas and U Mumba settled for a 30-30 tie in the Pro Kabaddi League.

U Mumba raider V Ajith Kumar scored 15 points in the match and helped his team to secure a tie.

The first half began with Tamil Thaliavas defenders paying no respect for the opponents. Captain Surjeet Singh, ably supported by Sahil Singh in the left corner, thwarted Mumbai raiders Abhishek Singh and V Ajith Kumar in successive attempts. With lanky raiders, Manjeet and Bhavani Rajput’s impressive raids the Thaliavas clinched their first all out in the 7th minute to open up an 8-point lead.

The Thalaivas had six successful tackles as opposed to none by U Mumba in the first 15-minutes but they lost their course in the final minutes of the first half.

The first half ended 17-14 in favour of Thaliavas but with momentum on Mumbai’s side. Tamil Thaliavas continued with their aggressive approach in the early minutes of the second half with Bhavani Rajput looking their best raider.

But the Thalaivas continued to struggle against their former raider Ajith Kumar who clinched his Super 10 and helped Mumbai keep pace as his raid points fetched U Mumba an all out with six minutes remaining in the match.

However, in the final raid, Ajith Kumar went for the touch instead of sacrificing himself for a bonus point and the Thaliavas defence rounded him off to secure a tie.