New Delhi: The Euro T20 Slam conducted their player draft with much fanfare and involvement of some of the biggest active and retired cricketers in London recently. The reigning ICC Cricket World Cup winning captain—Eoin Morgan—was also included in the player draft as an icon player.

The league was officially launched by legends Wasim Akram and Dilip Vengsarkar. 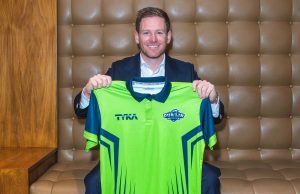 However, some media reports suggested that the August 30 to September 22 twenty20 tournament has not been approved by the International Cricket Council (ICC) and have not followed a proper auction/draft process.

Sports Lounge carried an investigation into the reports and found that the story/stories were not backed by facts. Interestingly, the ICC carried a news about the upcoming tournament on their official website icc-cricket.com. The world governing body is unlikely to publicise/advertise a tournament which has not been approved by them.

Former CEO of Cricket Hong Kong Tim Cutler quashed the reports in his tweets saying that the story was bereft of proper research. 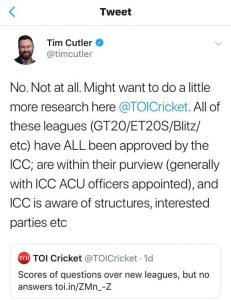 Exclusively confirming to Sports Lounge, the promoter of Euro T20 Slam—Prashant Mishra of Woods Entertainment—said the league was approved by the ICC earlier this February.

“ICC has approved this tournament way back in February 2019 itself. All team owners have been checked with due diligence by ICC Anti-Corruption Unit and only then they are being allocated the teams. We are also appointing the anti-corruption unit of ICC for their services to ensure absolute clean games,” Mishra told the portal.

On getting a broadcaster on board, Mishra informed that it has been finalised and the organisers will announce their name soon.

“One of the leading broadcasters has been confirmed for India that will be announced soon. PTV sports in Pakistan, Sky in UK and NZ, Fox in Australia, ESPN/ DAZN in North America, Supersport in South Africa, Sportsmax/ Flow in Carribbean are in negotiations,” he added.

Former Netherlands captain Peter Borren and a plethora of other Scottish and Irish stars took to social media to express their appreciation for the T20 tournament.

There were also reports about former India captain and legendary spinner Anil Kumble’s involvement in Euro T20 Slam in an advisory role without permission from the ICC, where he is the head of the technical committee.

The aforementioned report has no official statement from the ICC about the organisation being unhappy with Kumble’s role in the league. Someone of the stature of Kumble should be given the benefit of doubt that he would have definitely read his contract with ICC before associating himself with the league.

Sports Lounge has approached the ICC and the organisers for a formal statement on the matter.

Quite a remarkable opportunity for people in Holland to see world class players mixing it with dutch talent in our backyard. I hope everyone gets in behind the @et20s https://t.co/qOx2teqnq0

📹 Watch: The moment when @Eoin16 and @babarazam258 collected the Dublin Chiefs jersey 👕💚