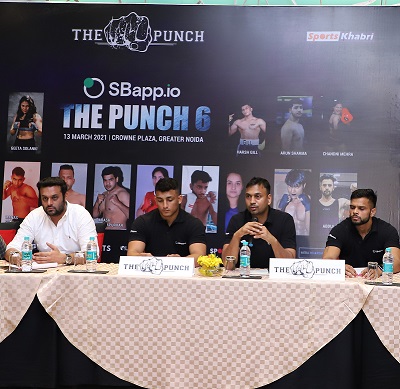 New Delhi: Driven by the overwhelming response in the past, India’s renowned sports organization ‘Sports Oodles’ is all set to host the sixth edition of The Punch Boxing, a professional boxing tournament sanctioned by the Indian Boxing Council (IBC). The event will take place on March 13th, 2021 at the Crowne Plaza, Greater Noida, 5 pm onwards.

Started in the year 2013 backed up by the Indian Boxing Council (IBC) with a kind motive of empowering young men and women in their roles as proactive community leaders through the Young Coach Education Program by sports Oodles, the initiative has garnered appreciation from all over the nation due to its welcoming nature towards the pugilists in India.

Commenting on the Punch Boxing, the head-honcho of Sports Oodles Mr. Arif Khan, Managing Director said, “We started the Punch Boxing in 2013 with the sole aim to promote sports and sports people of India. The vison since then has been to provide a competitive environment and prepare Indians for international competitions. Over the last few years, we have managed to get on board some of the best ranked professional boxers from India as well as other countries like Holland, Armenia, Cameroon, Afghanistan, Thailand etc.”

As the boxing event is starting with its fresh edition, it has been honoured with the participation of some well-known boxers across the nation like Sagar Narwat, Harsh Gill, Akash Girjaporkar, Chandani Mehra and a few debuts boxers. This year the competition will be divided into 5 categories with a total of 16 participants

Talking about the only professional boxing series in India to have been organized in multiple cities, Mr. Khan further added, “I am overwhelmed with the response we are getting for the sixth edition in terms of great sponsorships, perfect venue, global broadcasters and best fighters from India.

“This time it’s going to be a neck to neck fight with some unexpected knockouts. Moreover, we are working towards making The Punch Boxing a global platform and look forward to Punch Boxing world champions. Let’s hope for the best. Professional Boxing in India will see massive growth in 2021.”