“It is very inspiring when sports journalists give such awards,” said Bajrang Punia, adding that the DSJA award would inspire him to work harder in the run up to the 2020 Tokyo Olympic Games. 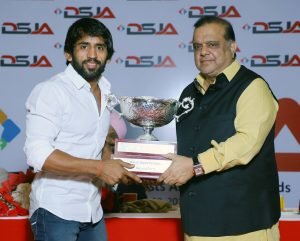 Rishabh Pant echoed such thoughts. “I can never forget how many Delhi sports journalists encouraged me from my early days,” he said. Rishabh spoke of how the media has been supporting junior cricketers, with their results for a very long time.

Rani Rampal, who was permitted to take a day off from the National Camp in Bengaluru, was delighted to receive the Best Sportswoman award.  “We are focused on doing well for India and such awards keep us going in right direction,” she said. The award for Manu Bhaker, who is representing India in the Asian Air Gun Championship in Chinese Taipei, was received by her father.

Dr. Narinder Dhruv Batra, who was the Special Invitee, said recognition of their efforts gives the athletes immense satisfaction and motivation to do better. “What the DSJA is doing here today is very much in line with that belief. And who can be a better jury that the sports journalists themselves who write, report and chronicle up and coming and elite athletes every day,” he said.