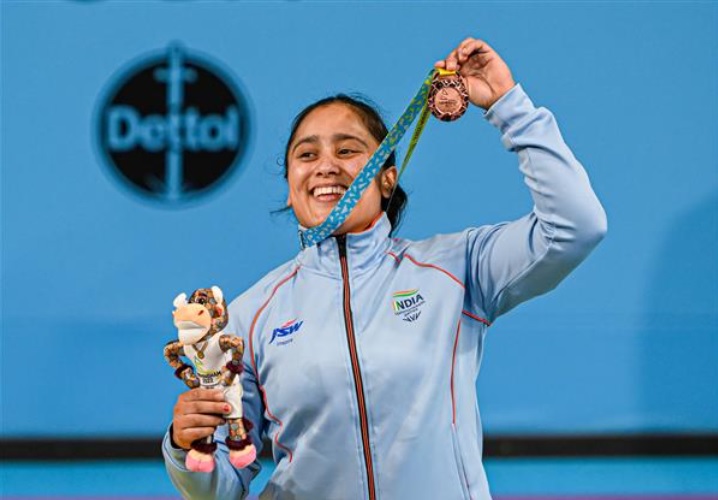 The Punjab government on Tuesday announced a cash reward of Rs 40 lakh for weightlifter Harjinder Kaur after she claimed a bronze medal in the 71kg category at the ongoing Commonwealth Games in Birmingham.

A resident of Nabha in Patiala district, Harjinder totalled 212kgs (93 in snatch and 119 in clean and jerk) to finish on the podium on Monday night.

England’s Sarah Davies won the gold medal with a total of 229kgs, while Canada’s Alexis Ashworth bagged the silver with 214kgs.

“Congratulations to Harjinder Kaur, a native of village Mehas near Nabha, for winning a bronze medal at the Commonwealth Games. Harjinder you will be a source of inspiration for girls in Punjab. Congratulations to your parents and coaches too,” Mann tweeted.

“Punjab’s weightlifting player Harjinder Kaur won bronze medal in Commonwealth Games-2022. Harjinder Kaur, a resident of Nabha, will be given a prize money of Rs 40 lakh under the sports policy of the Punjab government. This achievement of Harjinder will encourage sportspersons, especially our daughters in future.”

Meanwhile, the residents of Nabha went into a frenzy following Harjinder’s success in Birmingham.

“It is a proud moment as she won the bronze after a lot of hard work. We all were confident that she would excel,” said Harjinder’s brother, Pritpal Singh.

“Everyone in the family supported her in making a mark in this field,” he added.