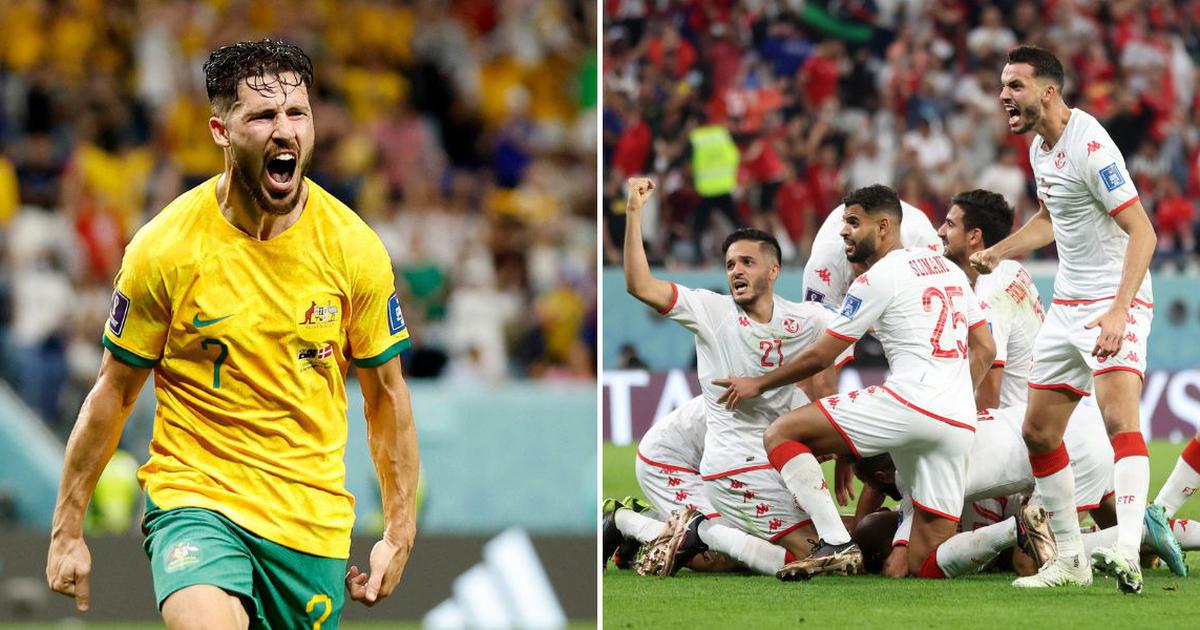 Australia reached the last 16 of the FIFA World Cup for only the second time in their history with a 1-0 win over a disappointing Denmark while Tunisia claimed a famous 1-0 win over holders France but it was not enough for them to reach the last 16.

Winger Mathew Leckie scored the winner on the hour with a smart run and finish to end Denmark’s Qatar hopes at the group stage.

Australia, who made the knockout rounds in 2006 when they had Harry Kewell, Tim Cahill and Mark Viduka in their ranks, have now won back-to-back World Cup games for the first time.

They progressed to the knockouts in second place behind holders France in Group D and will play the winners of Group C. Poland are top of that group going into the final round of matches.

These Socceroos do not have the stars of yesteryear but they make up for it with spirit and hard work, and showed flashes of quality in a strangely subdued encounter.

Australia’s substitutes all had their arms around each others’ shoulders for the pre-match national anthem, a sign of the togetherness that had taken them to the brink of the knockouts.

European semi-finalists Denmark, who had to win to stand any chance of going through, were on top in the early stages.

Australian defender Milos Degenek, the only change from the team that beat Tunisia 1-0, denied an almost certain Denmark goal with a crucial block.

Denmark’s Mathias Jensen, the Brentford midfielder, shot powerfully at goal and was denied by goalkeeper Mathew Ryan in the 11th minute when he probably should have passed.

Socceroos captain Ryan was in the thick of it again soon after, frantically hacking the ball away with his feet after an incisive run down the left by the dangerous Joakim Maehle.

Australia were just about on top when a sterile first-half meandered to a goalless conclusion.

Australia and Denmark both made one change at the break and spectators at Al Janoub Stadium would have been hoping it might trigger a bit more action in the second half.

Jackson Irvine scooped over the bar shortly after the restart for Australia and then the shock news filtered through that Tunisia had taken a surprise 1-0 lead over a weakened France team.

One minute after that, on the hour, Australia took the lead.

Leckie found himself one on one with an exposed Maehle on the left and turned him inside out before pinging the ball into the bottom corner past Schmeichel. Cue pandemonium from the Australian bench.

Denmark thought they had won a penalty in the 70th minute but there was an off-side and their World Cup hopes slipped away without much of a fight.

French-born Wahbi Khazri scored the only goal of the game as Tunisia beat France.

France coach Didier Deschamps, whose team were already through to the knockouts, made nine changes but they were a shadow of their usual selves and Khazri punished them in the 58th minute at Education City Stadium.

Tunisia then had to hold on for the victory as an Antoine Griezmann goal in stoppage time was disallowed following a VAR review.

Khazri, who grew up in Corsica and plays in Ligue 1 for Montpellier, was one of six players in the Tunisian line-up who were born on French soil and he was capped by France at Under-21 level.

There is a large Tunisian community in France who will savour the result, the country’s first win against European opposition at a World Cup and just their third ever in 18 matches at the tournament.

However, they needed Australia to drop points in the day’s other Group D game to stand a chance of reaching the last 16 for the first time.

The Socceroos’ 1-0 win over Denmark means it is they who go through with France.

The world champions and Australia finished level on six points, but France top the section on goal difference and will await the Group C runners-up in the last-16 on Sunday.

Les Bleus had been the first team to secure a place in the next round after winning their opening two games in Qatar so it was no surprise that Deschamps opted to make changes.

Kylian Mbappe was one of those to drop out, with Eintracht Frankfurt’s Randal Kolo Muani getting his first international start up front.

There was also a start at right-back for Axel Disasi, the first outfield player to make his France debut in a World Cup match since 1966, while Real Madrid midfielder Eduardo Camavinga started at left-back.

France were unrecognisable as Deschamps repeated what he had done four years ago, when he made sweeping changes for the final group game against Denmark.

The result then was a soporific 0-0 draw which did not ultimately stop France from winning the title.

This time France’s second string performed as if they had never played together before and Tunisia -– with a partisan crowd behind them – sensed their chance as they looked to get beyond the group stage at a World Cup for the first time.

The crowd erupted when Tunisia put the ball in the net just eight minutes in.

Nader Ghandri diverted a Khazri free-kick past Steve Mandanda, but he was just offside.

Starting at this World Cup for the first time, captain Khazri also stung the palms of Mandanda with a volley in the 35th minute, while a shot that Kingsley Coman skewed well wide was as close as France came.

They were disjointed, and it was no surprise when Tunisia took the lead.

France appealed in vain for a foul as Youssouf Fofana was dispossessed by Ellyes Skhiri, and Khazri ran through before slotting a shot past Mandanda.

Deschamps then sent on Mbappe as well as Griezmann and Ousmane Dembele in an attempt to avoid France’s first World Cup group-stage defeat since their disastrous 2010 campaign.

Griezmann thought he had equalised deep into injury time when he volleyed home inside the box, but the referee disallowed the goal for offside after a lengthy VAR review.