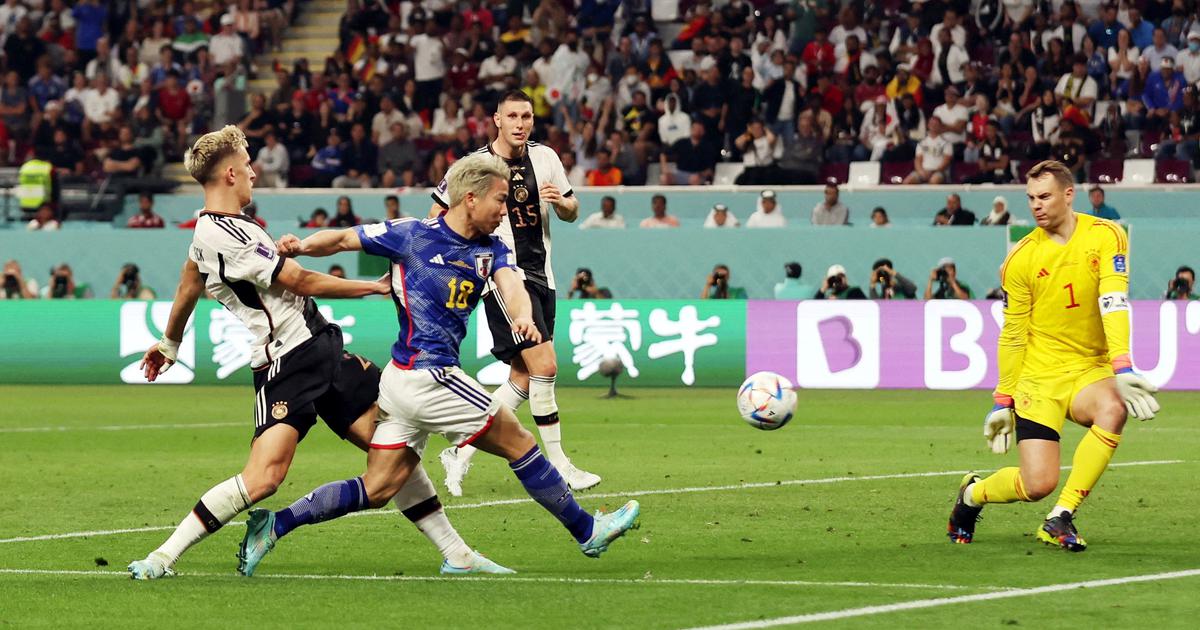 Doha: Following the shocking defeat against Japan in the Group E match, Germany manager Hansi Flick said that with zero points in their hands his team is in under pressure and added that the team had great chances to score in the second half but they failed to convert them.

Substitutes Ritsu Doan and Takuma Asano scored late goals Wednesday to give Japan a come-from-behind 2-1 victory over Germany at the World Cup.

Ilkay Gündogan had given four-time champion Germany the lead with a first-half penalty. But Doan, who plays for the German team Freiburg, pounced on a rebound to equalize in the 76th minute after Germany goalkeeper Manuel Neuer blocked a shot from Takumi Minamino.

Then Asano, who plays for the German team Bochum, sprinted clear of Nico Schlotterbeck and beat Neuer from a narrow-angle in the 83rd minute. It was the first competitive meeting between the two nations.

Before the game, Germany’s players covered their mouths during the team photo in an apparent rebuke to FIFA following its decision to stop plans to wear armbands to protest discrimination in host nation Qatar.

Japan made a scintillating comeback to create a massive upset against Germany, defeating the four-time champions 2-1 in the group E match of the FIFA World Cup at the Khalifa International Stadium on Wednesday.

“With this defeat and zero points, we are under pressure, no question about it. We can only blame ourselves. It’s a great disappointment,” Hansi Flick was quoted as saying by Skysports.

“We were on the right path in the first half, we had 78 per cent possession and were ahead 1-0. Then we had good chances in the second half that we didn’t take advantage of. Japan were simply more efficient today. We made mistakes that we should never commit especially in a World Cup and those are the things that we need to improve on,” he added.

Germany goalkeeper Manuel Neuer echoed his coach’s thoughts and said that he is really frustrated and angry that they let the match slip away from their grasp.

“I am totally frustrated and angry that we let this game slip, it was not necessary. After the break we no longer had this game flow and did not play with the same confidence as in the first half. We are now under pressure from the start. That was also the most important game of how you start in a tournament but we messed it up,” Manuel Neuer said.

Talking about the match, Germany were leading at the end of the first half but Japan scaled up their game in the second half, scoring in the 75th minute through Ritsu Doan and in the 83rd minute through Takuma Asano.

Takuma Asano was brought in as a substitution in the 57th minute and proved his mettle in the match as Japanese supporters yelled and cheered from the stands.

The second half saw the Japanese players come with a new fervour, zeal and confidence as they dominated the ball possession and made constant runs to the German box.

Gundogan, who had scored for Germany through the penalty kick in the first half, continued his good form and came very close to scoring in the 60th minute but the ball ricocheted off the goalpost to the huge disappointment of German fans.

Germany ended with superior ball possession and shots on goal but piercing attacks by the Japanese team left them vulnerable.

With this win, Japan has got to the top of the table in Group E which also features Germany, Costa Rica and Spain. Germany were leading Japan 1-0 at half-time after Ilkay Gundogan scored via penalty kick in the group E match at the Khalifa International Stadium on Wednesday.

Japan goalkeeper Shuichi Gonda failed to prevent a goal in the 32nd minute of the match. Gundogan netted the ball straight into the goal through a penalty kick to give Germany 1-0 lead.

The four-time FIFA champions wasted no time and came out all guns blazing as they went deep inside the Japanese box in the second minute of the game and looked threatening from the beginning.

Daizen Maeda challenged German Antonio Rudiger to dribble the ball past him but the centre-back was alert and cut the Japanese’ run short.

Maeda was in the reckoning once again in the 8th minute as he made a brilliant run to get to the ball perfectly and score, only to be called off-side. There was a constant struggle between the sides for possession. Japan also had the advantage for some time.

Germany came close to scoring in the 16th minute with a superb corner kick from Joshua Walter Kimmich that was headed just a few inches wide by Rudiger.

A free-kick was given to Germany as Thomas Muller was brought down by Takefusa Kubo in the 18th minute but the Germans failed to score off it. Gundogan troubled the Japan team with his brilliant football skill as he managed to constantly find vacant spaces in the field.

The German finally scored via a penalty to give Germany a one-goal lead over Japan.

Japanese players seemed a bit demotivated after trailing and faltered with the ball, giving possession to the German players in the first half.

Both Japan and Saudi Arabia came from behind to clinch famous victories against their fancied rivals.