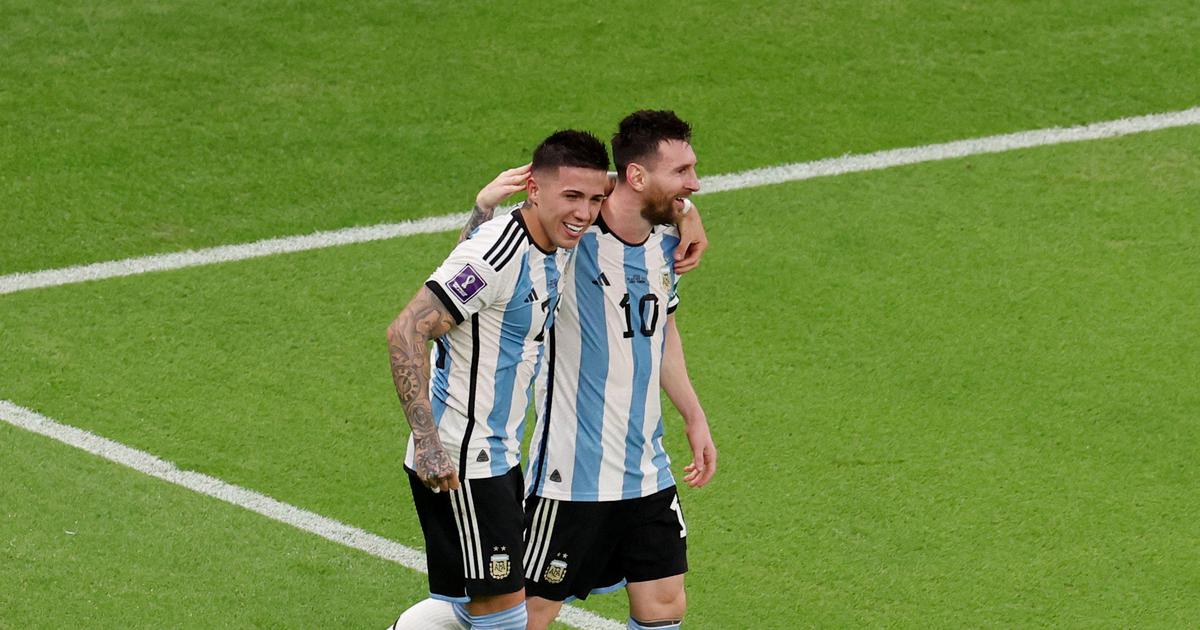 Defeat to outsiders Saudi Arabia in their opening Group C match in Qatar had left Argentina on the brink, knowing another loss would spell the end of their tournament chances.

But the Albiceleste just edged a disjointed and tetchy affair against their fellow Latin Americans at the Lusail stadium in Doha.

And who else but talisman Messi should be the hero, firing home a low shot from 20 yards on 64 minutes, before Enzo Fernandez added a sumptuous second goal for Argentina three minutes from time.

“The first game cost us,” said Messi. “We knew that we had to win today, that another World Cup was starting for us and we knew how to do it.

“It was a tough game to pick ourselves up for because Mexico play well.

“They played the first half with intensity but the second half we relaxed and became ourselves again.”

Messi’s goal meant he tied the late Diego Maradona on eight goals and 21 appearances at the World Cup for Argentina.

It came a day after Argentines marked the second anniversary of Maradona’s death.

The goals were two rare moments of quality in an often poor and tense encounter where the occasion seemed to get to everyone, except seven-time Ballon d’Or winner Messi.

But Argentina still need to win their final group match against Poland to guarantee a place in the knock-out stages.

“We cannot let up now. Every game is a final now, we cannot make any mistakes,” said Messi.

The first half was an entirely forgettable affair.

Mexico’s back five and aggressive approach left Argentina with little space or time to construct anything.

And the Mexicans never had enough players forward to cause their opponents problems when trying to counter.

The two sets of fans deserved so much more as they created a feverish atmosphere in the Lusail Stadium that was close to capacity with more than 88,000 supporters.

But even Messi could make no inroads, struggling to get on the ball and even less so in areas where he could cause damage.

Argentina came closest when Mexico goalkeeper Guillermo Ochoa made a hash of trying to punch away a Messi free-kick that was curling dangerously towards goal.

The referee’s whistle saved Ochoa as he collapsed to the ground claiming he was fouled.

That was another feature of the first period – players rolling around on the turf clutching their faces after imagined contact.

Argentina coach Lionel Scaloni wasted little time in the second half to change things up, bringing on three substitutes by the 63rd minute, including Manchester City youngster Julian Alvarez for the ineffectual Lautaro Martinez.

Within a minute, Messi was criminally left unmarked just over 20 yards from goal to take a drilled pass from Angel Di Maria, which he cushioned with a sublime first touch to then pick out the bottom corner with a fierce low drive.

Scaloni immediately switched to a back three, bringing on centre-back Cristian Romero for winger Di Maria.

Mexico coach Gerardo Martino responded by throwing on forward Raul Jimenez for a defender and changed to a 4-3-3 formation.

But substitute Fernandez had the final say, curling a delectable strike into the top far corner.

“I always dreamed as a kid of wearing this jersey and today I achieved the dream of scoring in a World Cup,” said the 21-year-old Benfica player.

The win means Messi and Co are second in the group on three points behind Poland on four points. Saudi Arabia and Mexico are still alive too with three and one point each as the four teams head for a thrilling climax.