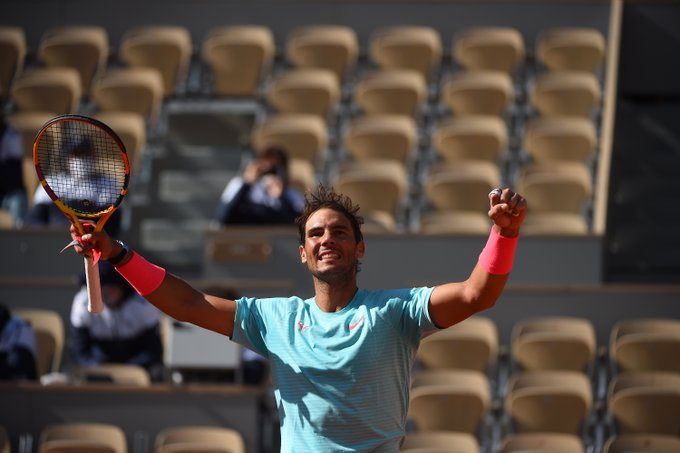 The Spaniard secured his first title of the year and 87th of his career, denying Tsitsipas back-to-back triumphs following his maiden Masters 1000 title at Monte Carlo last week.

Nadal avenged his Australian Open quarter-final loss to Tsitsipas and will return to second in the ATP rankings on Monday by climbing back above Daniil Medvedev after his marathon 3-hour 38-minute win.

“It means a lot for me to play the final here and win… I improved my level during the week and this trophy means a lot,” said Nadal.

Nadal redeemed himself after a surprise quarter-final exit in Monte Carlo, but the three sets dropped en route to the title represented the most in any of his wins here.

“It’s an everyday job, accepting the challenge, staying humble when sometimes you don’t play as well and you have to fight to find solutions every day,” he added.

No man has won more matches this year than Tsitsipas (26) but the 22-year-old has lost all seven finals at the ATP 500 level.

“I’m really jealous. But you’ve earned it. You’re one of the biggest competitors in our sport, I’m sure you know that,” he added.

Second seed Tsitsipas, a Roland Garros semi-finalist in 2020, had won all 17 sets on clay this season and entered the final unbeaten on the surface in nine matches.

The Greek built up a 4-2 lead in the opening set after breaking Nadal in the third game but dropped his serve twice in succession as the 20-time Grand Slam champion hit back to win four games in a row.

Fifth-ranked Tsitsipas, who won just three games when the pair met in the 2018 final, again procured an early break in set two but Nadal responded to haul himself level at 3-all.

Nadal failed to convert two match points as Tsitsipas clung on to hold when trailing 5-4, with the Spaniard saving three break points in the very next game.

Nadal took a 4-2 lead in the tiebreak but the momentum swung back towards Tsitsipas as he won four straight points, blowing two set points before forcing a decider at the third attempt after a double fault from his opponent.

In sharp contrast, the third set went on serve without a single break opportunity until Tsitsipas edged to within a point of the title with Nadal on the ropes serving at 4-5.

Nadal survived though and finally converted his fourth break chance in the following game, snuffing out a Tsitsipas break point in the final game before clinching his 61st clay-court title.

His 12 Barcelona victories are second only to his 13 Roland Garros trophies.