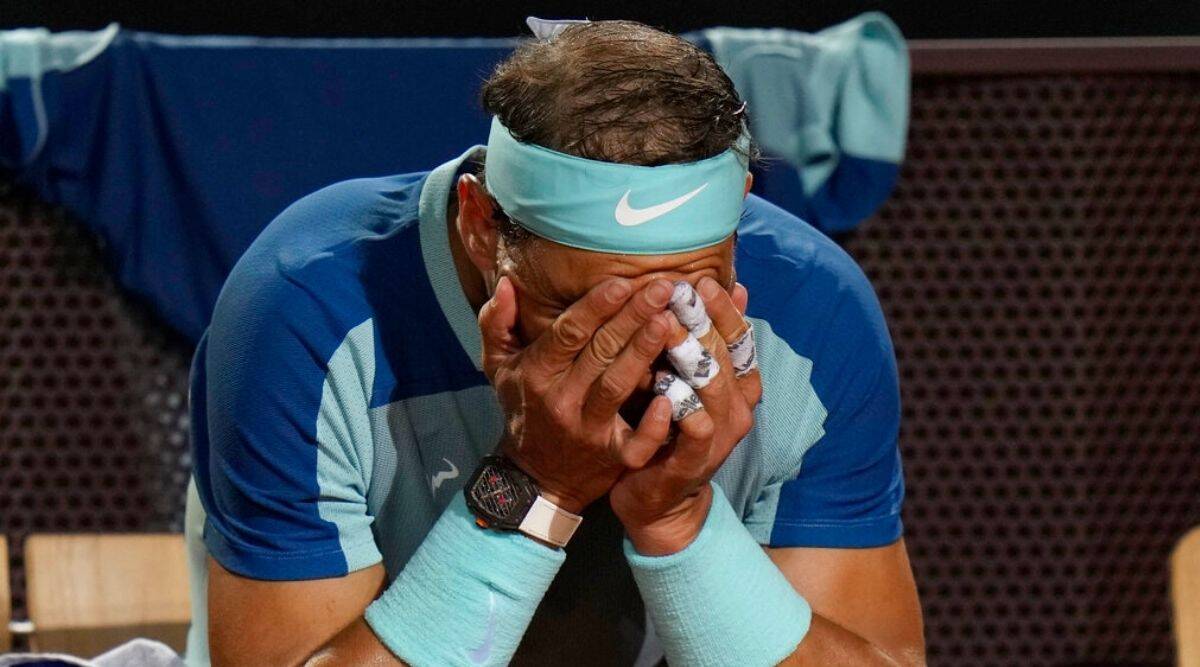 With just 10 days to go before the French Open, Rafael Nadal is struggling with an injury again.

Nadal was hampered by a foot problem toward the end of a 1-6 7-5 6-2 third-round loss to Denis Shapovalov at the Italian Open on Thursday.

At one point, the 35-year-old Nadal walked over and leaned on his towel box, and grimaced in apparent pain. He also limped between points.

Nadal missed a large portion of last year with a left foot injury.

“I hurt my foot again with a lot of pain,” Nadal said.

“I’m a player living with an injury. It’s nothing new. It’s something that is there, unfortunately. Day by day is difficult.” It was a worrisome scene for Nadal — especially with the French Open starting on May 22.

“What can happen in the next couple of days, I don’t know,” said Nadal, who has won Roland Garros a record 13 times.

“What can happen in one week, I really don’t know now.” Nadal returned to the tour last week following a rib stress fracture that kept him out for six weeks after a blistering start to the year that included his record 21st Grand Slam title at the Australian Open.

“It’s difficult for me to accept the situation sometimes,” Nadal said.

“Can be frustrating that a lot of days I can’t practice the proper way.” Nadal was also beaten by 19-year-old Carlos Alcaraz in the quarterfinals of last week’s Madrid Open.

Nadal double-faulted twice then missed a backhand long to hand Shapovalov a break of his service and the second set. Shapovalov then took complete control when he won 14 straight points late in the third.

“Definitely tough to see him in pain there at the end,” said Shapovalov, who will face Casper Ruud in the quarterfinals.

“I never want to see that, especially with a great legend like Rafa. … He brings so much to our sport. Hopefully, he’s fit and ready to go for the French.”

Nadal, who has won the Italian Open a record 10 times, said his foot started hurting midway through the second set, adding: “Then (it) wasn’t playable for me.” Earlier, top-ranked Novak Djokovic was untroubled in a 6-2 6-2 win over Stan Wawrinka, who was playing only his second tournament after undergoing two surgeries on his left foot.

Djokovic, a five-time champion in Rome, will next play Felix Auger-Aliassime, who ended the run of American qualifier Marcos Giron with a 6-3 6-2 victory. It will be the first meeting between Djokovic and Auger-Aliassime.

In the women’s tournament, top-ranked Iga Swiatek was tested before pulling out a 6-4 6-1 victory over former No. 1 Victoria Azarenka to reach the quarterfinals and extend her winning streak to 25 matches.

Azarenka took a 3-0 lead before Swiatek won five straight games in a grueling first set that lasted 1 hour, and 20 minutes.

“My first serve wasn’t working properly,” Swiatek said “But I’m happy that I could kind of win ugly in the first set, then improve in the second. It gives me confidence that even when my game is not 100 percent good, I can still win matches.” Swiatek is attempting to win her fifth straight tournament and defend her title in Rome.

The last player to win more consecutive matches was Serena Williams, who had a streak of 27 in a row between 2014 and 2015.

“(The streak) doesn’t really matter for me because every match is different,” Swiatek said.

“In many matches, I struggled this season, even though I won them. Anything can happen. Every match is a different story.” Swiatek’s run makes her a favorite to win a second French Open when the year’s second Grand Slam gets underway in 10 days. When Swiatek won at Roland Garros in 2020 she was ranked No. 54 — making her the lowest-ranked woman to win the Paris major in the Open era.