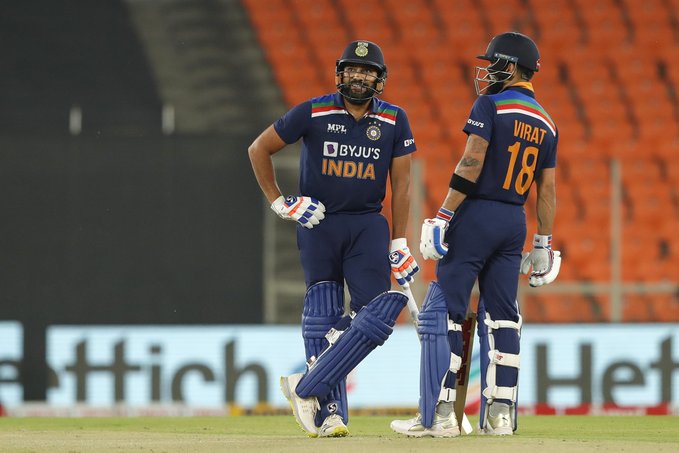 Ahmedabad: Former captain Sunil Gavaskar said he would like to see India persist with the opening combination of Rohit Sharma and Virat Kohli in T20 Internationals.

Captain Kohli and Rohit opened the innings for India in a T20I for the first time on Saturday and their 94-run stand helped India beat England by 36 runs and win the series.

“Your best batsman should bat the most number of overs in limited-overs cricket. So it was very important for Virat Kohli to bat at the top of the order. So maybe, KL Rahul’s loss of form has been a blessing in disguise because this has given us an opening combination to look forward to,” Gavaskar told India Today.

“Like when Sachin Tendulkar was batting down the order in ODIs and then he was sent up to open the batting and what a transformation it had not just on his batting but the whole team. So clearly, your best batsman has to bat as many overs as they can,” he further said.

While the partnership was finally broken in the ninth over when Rohit fell to Ben Stokes, Kohli stuck around and ended the game unbeaten on 80 off 52 balls as India scored a mammoth 224/2. Suryakumar Yadav (32 off 17 balls) and Hardik Pandya (39 off 17 balls) scored quick runs around Kohli.

“I would persist with this opening formula. Look at the way they fed off each other. You could see the interaction between the two of them, whenever each of them got the big shot going,” said Gavaskar.

“When that happens, when two leaders of the team show the way, it becomes easier for the guys coming down the order. With Suryakumar Yadav, in India colours and playing those cameos, it’s really good,” Gavaskar added.