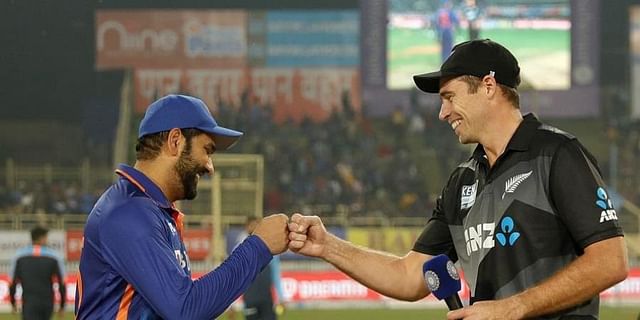 Kolkata: Captain Rohit Sharma will not waver from his ruthless approach but might try out a few of his reserve players as India aim for a clean sweep against New Zealand in the third and final T20 International, here on Sunday.

The bilateral T20I series in various parts of the globe is fast losing its context due to too many private leagues but for the Indian team, after their World Cup disaster, a series win might help in partially healing the wounds.

For New Zealand, it’s more about completing the assignment after a punishing schedule that will see them play five games (since the T20 WC semi-final) in less than two weeks.

The scheduling means that a 0-3 defeat without services of skipper Kane Williamson will bruise egos but not deflate them as results of bilaterals count very little in the long run.

Having already pocketed the series with a couple of near-perfect chases on Jaipur and Ranchi belters, there couldn’t have been a better venue than Eden Gardens for skipper Rohit to end the series on a perfect note and also try out some of his reserve bench players.

The first series as full-time T20 captain has gone well for Rohit as he won two tosses, his bowlers put a stranglehold on Black Caps batters during end overs and then as a batter he provided great starts to set the platform.

The script has been flawless so far and before Rohit goes into the break, a 3-0 annihilation of New Zealand in the ‘City of Joy’, where he scored his epic 264 in an ODI, will be like icing on the cake.

For coach Rahul Dravid, a dominant performance like this will also help him settle the nerves into the new role before the marquee Test series against the same rivals starting in less than a week’s time.

Having already won the series, Rohit and Dravid will now like to maintain a fine balance between winning and also trying out all their available resources to see how each and every individual is placed.

Giving Venkatesh Iyer a go with the ball with the evening breeze from River Hooghly aiding a bit of movement won’t be a bad idea but it depends whether Rohit wants a sixth bowler.

Hence the likes of Ruturaj Gaikwad, Avesh Khan and Ishan Kishan will expect that their skipper consider them for a game in this series.

Gaikwad, who came into the series with an Orange Cap in the IPL might get a look-in in the top-three where he is the most comfortable batting

But for that to happen, either skipper himself or his deputy KL Rahul might have to take rest for the game, which is more of academic interest and gives an ideal premise to check the bench strength.

Resting Rahul looks more logical as he is supposed to play a rigorous Test series in four days’ time and one T20 International won’t make much of a difference for the stylish right-hander.

Similarly, the exciting Avesh Khan could be tried in place of either Deepak Chahar or Bhuvneshwar Kumar while Yuzvendra Chahal wouldn’t mind getting a game in place of Axar Patel or Ravichandran Ashwin.

Similarly, Rishabh Pant, who has been playing non-stop since the start of the World Test Championship, maybe rested and Ishan Kishan can be given a go in the last game.

If one looks at the series, the biggest gain has been Ravichandran Ashwin’s form in white-ball cricket after the previous regime kept him in the cold for four years as they never believed in him.

Figures of 2/23 and 1/19 from two games has put Ashwin firmly in contention for a ‘Player of the Series’ award.

Harshal Patel has carried on from where he left at the IPL and a Player of the Match performance on debut will boost his morale going into the season.

For New Zealand, the real struggle had been between overs 15 to 20 when their batters haven’t been able to accelerate.

If India have clinched the series with ease, the reason had been below-par death overs batting by the Kiwis and some fine bowling by Ashwin and company in back 10.

Eden is expected to be a batting beauty and in November, dew is undoubtedly going to make it easy for any team batting second.