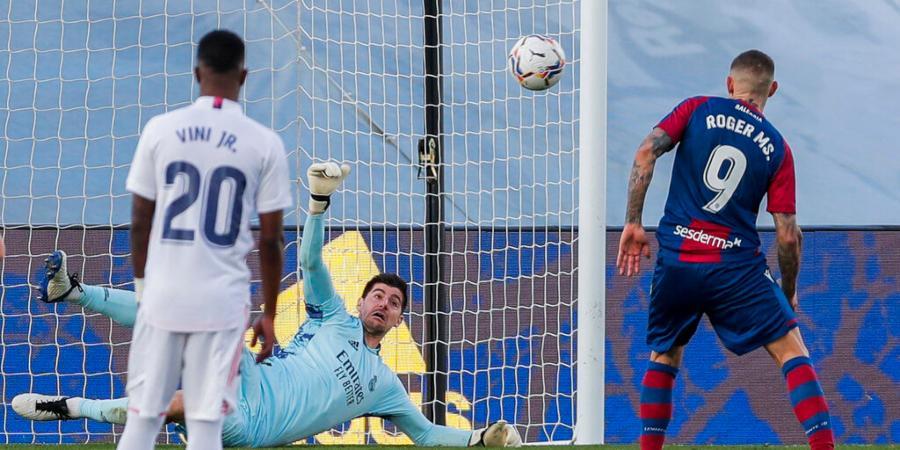 Barcelona: Real Madrid stumbled again in the Spanish league title race after losing 2-1 at home to Levante on Saturday with the defending champions reduced to 10 men shortly after kickoff.

Eder Militao, starting in place of the injured Sergio Ramos, was sent off eight minutes into the match with a direct red card for fouling Sergio León with only the goalkeeper to beat.

Despite losing a player, Marco Asensio put Madrid ahead in the 13th when he was launched on a counterattack with Toni Kroos’ excellent pass.

But Levante imposed its numerical advantage the rest of the way and enjoyed all the clear scoring chances.

Levante forward José Morales equalized in the 33rd with an exquisite volley to blast a pass from Jorge Miramón inside the far post.

Goalkeeper Thibaut Courtois saved Madrid from falling behind in the 64th when he stretched to parry Roger Martí’s penalty kick after substitute Vinícius Júnior fouled Charles Leclerc near the edge of the box.

Martí made up for his wasted spot kick in the 78th when he rifled in a shot following a smart move by Levante after a corner.

Assistant coach David Bettoni was in the dugout for a second straight match for Madrid as Zinedine Zidane continued his self-isolation after testing positive for COVID-19.

Sevilla eased to a 2-0 win at Eibar to move ahead of Barcelona and into third place — one point behind Madrid.

Lucas Ocampos opened for the visitors in the 28th from the penalty spot after Pedro Bigas fouled Youssef En-Nesyri.

After Joan Jordán tapped in Sevilla’s second goal in the 55th, Eibar goalkeeper Marko Dmitrovic asked to be substituted and spent the rest of the match in the stands with his left leg propped up.

Barcelona trails Sevilla by two points before it hosts Athletic Bilbao on Sunday.

Eibar was left in 15th place after just one win in 11 league games at its Ipurúa Stadium.