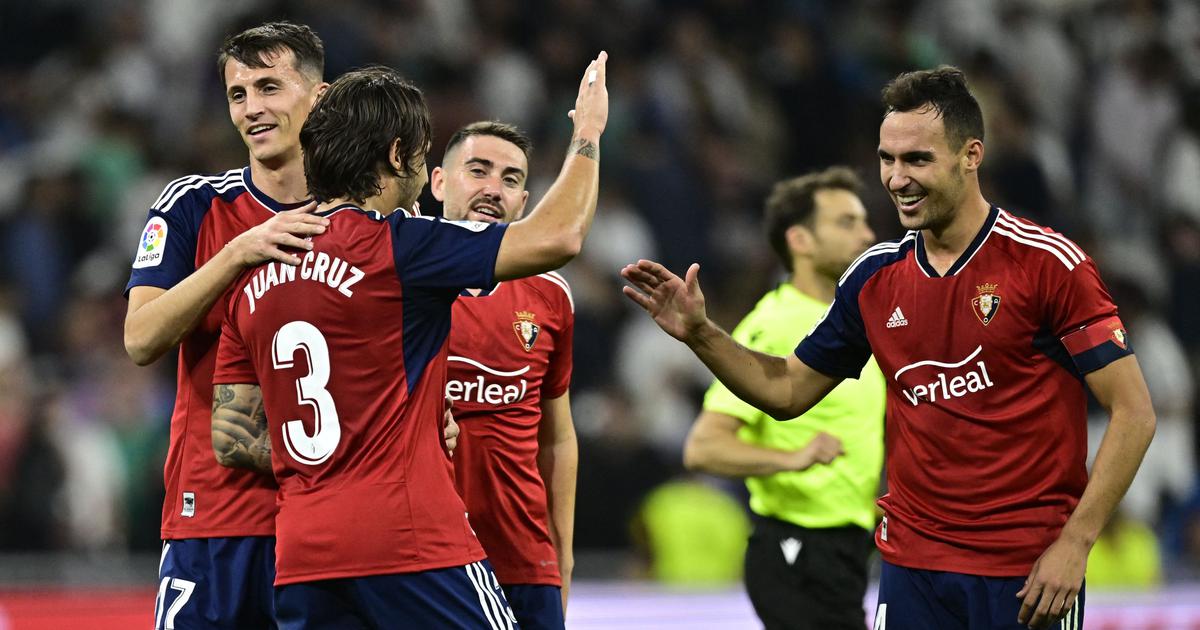 Karim Benzema missed a penalty for Real Madrid as they finally blinked in the La Liga title race, dropping their first points of the season in a 1-1 draw with Osasuna on Sunday.

After Barcelona beat Real Mallorca on Saturday, Madrid knew they had to win to stay top but were frustrated by Jagoba Arrasate’s well-organised side at the Santiago Bernabeu.

Benzema, on his return to the side after injury, won a spot-kick but then fired it against the crossbar, and also had a goal disallowed for offside as Madrid tried to force a way through.

Vinicius Junior broke the deadlock just before half-time with a cross that snuck all the way into the far corner, but Kike Garcia’s well-taken header early in the second period earned Osasuna a point.

“What we were missing was scoring that penalty, normally Karim scores them,” Madrid coach Carlo Ancelotti told DAZN.

“He had no problem playing the 90 minutes. It’s been a month since he’s played, he has to get his best form back. He did his part, he had the chance from the penalty. It’s an accident, sometimes it happens.”

Benzema made his first appearance since September 6, while Andriy Lunin and Dani Ceballos started in place of injured duo Thibaut Courtois and Luka Modric.

Madrid probed promisingly down the flanks, while at the other end Abde Ezzalzouli, on loan at Osasuna from Barcelona, crashed a shot into the side netting on a bright display.

Madrid opened the scoring in fortuitous fashion, with Vinicius whipping in a low cross which caught out goalkeeper Sergio Herrera and crept in at the far post.

Osasuna complained that Benzema and Antonio Rudiger were offside and interfering with play, but their protests were dismissed.

The visitors were level five minutes into the second half, when Kike Garcia brilliantly looped a backwards header over Lunin.

The goal meant Madrid have failed to keep a clean sheet in any of the first seven league games.

“We were quite solid at the back,” insisted Ancelotti. “We conceded a goal from a deep cross, it was quite strange. The team was balanced, the objective is always to be strong to avoid conceding.”

Turning up the heat, Benzema drew a stunning save from Herrera, although he was offside, then neatly slipped through Rodrygo Goes, who fired over.

The French striker won a penalty when he was shoved over by David Garcia, who was sent off, but hit the crossbar with his effort. Moments later Benzema had the ball in the net, but it was disallowed for offside.

The draw means Barcelona lead Madrid on goal difference after seven games, with both teams on 19 points and unbeaten. It is the first time the Catalans lead the league at the end of a fixture round since June 2020.

“We have to celebrate, they had won all their games and we came back from a goal down, the team did great work and played a great game,” said Arrasate.

“If Madrid’s players weren’t offside then the goalkeeper’s position would have been different (for the opening goal).”

Earlier Real Sociedad, seventh, came out on top after an eight-goal thriller at Montilivi.

Norwegian striker Alexander Sorloth hit a first-half brace for the visitors either side of goals for Girona’s Rodrigo Riquelme and Arnau Martinez.

Valentin Castellanos put Girona ahead but Brais Mendez and Martin Zubimendi struck in the space of six minutes to restore the Basque side’s lead.

Takefusa Kubo made the game safe for La Real late on.

Real Betis fell to a narrow defeat at Celta Vigo, playing most of the game with 10 men after Luiz Felipe’s 20th-minute red card.

Gabriel Veiga slammed home in the opening stages from distance for the hosts at Balaidos and they moved 10th while Betis remained fourth.

Espanyol and Valencia shared a thrilling 2-2 draw which saw both sides reduced to 10 men after red cards for Martin Braithwaite and Marcos Andre respectively.