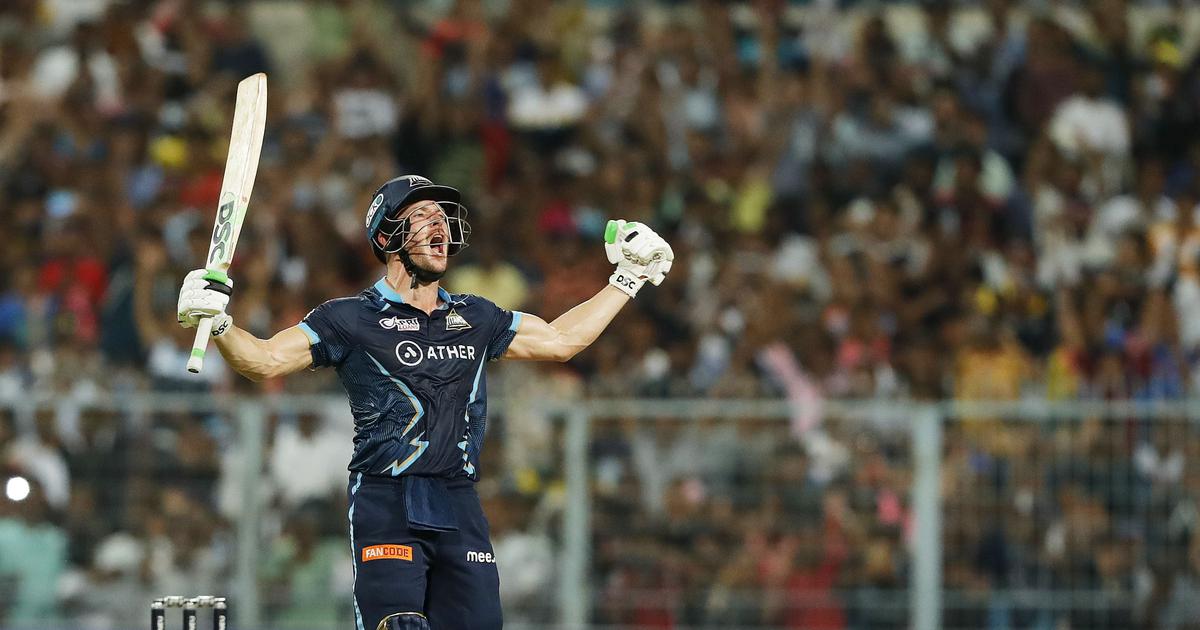 Kolkata: David Miller hit three effortless sixes which looked like action replays as Gujarat Titans, under their inspirational skipper Hardik Pandya, made a mockery of all the odds to reach the final of IPL-15 with a seven-wicket win over Rajasthan Royals on Tuesday.

On a track that was two-paced, Royals rode on Jos Buttler’s 56-ball-89 to post 188 for six in 20 overs, which seemed like a winning total considering the pressure of the occasion.

For a team which many tipped to finish last because of some out-of-the-box picks, turned out to be the most consistent and will now play the final in front of its home crowd at the Narendra Modi Stadium, with more than 100,000 people cheering them on.

No praise is enough for new ‘Captain Cool’ Pandya, who always looked in control even when things didn’t seem to go his team’s way.

One of the cleanest hitters, Pandya took the game deep with some well-placed boundaries which allowed Miller to take his time before unleashing five huge sixes — three off the last over from Prasidh Krishna, when the bowler completely lost his nerve.

The best part about Pandya’s captaincy was not taking any risks against the opposition’s best bowler Yuzvendra Chahal (0/32 in 4 overs) but left it to his partner, who hit two huge sixes to ease the pressure.

McCoy used his back of the hand slower balls to perfection as only seven came off the over, leaving Krishna with 16 runs to defend but it took Miller three balls to nail it, all in the length slots.

At the start of chase, Wriddhiman Saha (0) was all at sea against Boult and edged one that moved in and then straightened after pitching. Matthew Wade (35 off 30 balls) and Shubman Gill (35 off 21 balls) didn’t let it affect their batting as they added 72 for the second wicket to keep the chase on course.

Gill started slowly but then launched into Ravichandran Ashwin with a six over long-off followed by two boundaries on both sides of the square.

Wade also carried on briskly before a big mix-up ended in Gill’s run-out.

Skipper Pandya started with a square cut off McCoy before the bowler got Wade in the same over when Buttler took a well-judged catch at deep mid-wicket.

Earlier, Buttler enjoyed copious amount of luck and displayed a fair bit of pluck during an innings of 89, which took Rajasthan Royals to a challenging total after being put into bat.

The Orange Cap-holder Buttler, who had failed to get his act together in the second half of the season, got off to a slow start but made full use of a couple of dropped catches during his knock, which was studded with 12 fours and two sixes.

Buttler was also fortunate to get two reprieves — first on 43 — when Hardik Pandya slipped to miss a sitter, and then Rashid Khan grassed him on 69.

He then took on Alzarri Joseph, smashing three boundaries in an over to accelerate his scoring before getting run-out in the final over.

First up, it was Sanju Samson’s swagger that was on full display as the Royals skipper, seemingly hurt by the latest India selection snub, responded in style with a 26-ball 47 (5×4, 3×6).

At a time when Buttler struggled to get going, the wicketkeeper-batter dealt in boundaries in his entertaining powerplay display.

Samson shared 68-run stand with Buttler, of which 47 came off the former’s blade that summed up the domination from the Royals skipper after they were put in.

He looked ominous from the first ball itself, when he lofted Dayal over long-on for an effortless six.

Titans pace duo of Mohammed Shami and Alzarri Joseph struggled with their line and lengths as Sanju made full use of that to take the score to 55/1 in six overs.

Just when they were looking to go out of control, none other than the wily Afghan spinner put on the brakes, coming into bowl after the power-play.

With the ball gripping on the dry surface, Rashid cleverly used his variations against his ‘bunny’ Buttler as the Englishman struggled to rotate the strike.

He conceded just two runs from the second over that seemingly put pressure on Sanju to take on Sai Kishore in the next over as he perished to a flighted delivery.