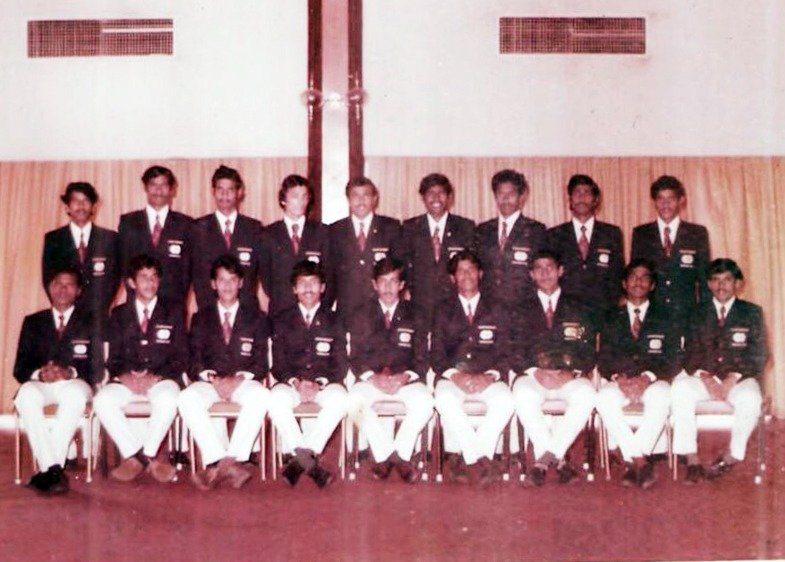 The Indian team's victory at the 1974 AFC Youth Championship was even praised by then PM Indira Gandhi.

India were declared joint winners with Iran in the AFC Youth Championship on April 30 in 1974.

India’s successes in international football are few and far between. The last one at the continental level came 45 years ago, on this very day (April 30) in 1974, against all odds and expectations, when India shared the Asian Football Confederation (AFC) Youth Championship (under-19) title with Iran in Bangkok, Thailand. I was fortunate to not only be a part of that team but also be its skipper.

The national under-19 team had participated in the tournament several times but had failed to move out of the group stage or reach the quarter-finals knock out stage. But this time it was destined to be different.

The usual preparatory one-month camp for the tournament kicked off in Patiala in attendance of 35-40 footballers under the stewardship of coaches Syed Abdus Salaam, the 1956 Olympian, and Arun Ghosh, the defender who featured in the 1960 Olympics; Dilip Kumar Ghosh was named the manager.

There was an uncertainty regarding the team’s clearance to play, the government not being in favour of sending the team as India’s past performances in youth selections were not impressive. But the federation officials assured the sports ministry that this was a promising lot and would fare much better than the earlier ones.

Since I was the senior most as well as the in-form player in the 1970s, the burden of captaincy was thrust on my wiry shoulders; Prasun Banerjee was named the vice-captain.

Our team spirit was good, we were just like a family and determined to give a good account of ourselves despite lack of expectations back home. The coaches and the manager were always ready to help us. Dilip-da even used to make bed tea with some players in his room and served the boys.

We mostly played with a 4-2-4 formation during the camp as well as in the tournament, with the acrobatic Prashanta Moitra in goal, Amit Dasgupta and Devanand as stopper backs and CC Jacob and Dilip Palit as side backs, both being keen to go on the overlap. 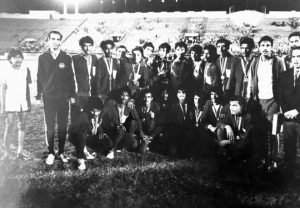 Shabbir Ali (centre) with the 1974 AFC Youth Championship trophy. Prasun Banerjee is standing to his left.

Devraj was a workaholic in the midfield and Prasun the creative one. We also had good ball players/speedy wingers in Mohammed Yakoob and Latifuddin while Harjinder and myself made up a nippy striking pair. Our bench strength was also formidable.

Our strategy was simple: take the lead in the first half and defend it till the final whistle. It clicked. In most of the matches, we were 1-0 up at half-time and won by that margin.

The funny thing was when we topped the group, beating Laos and Burma both by 1-0 margins and drawing with Hong Kong 2-2, we thought that we would never get past Singapore in the quarter-final!  I scored a goal apiece in first two games and the quarters, while Yakoob notched up a brace in the third.

We improved with each match and fought hard against Singapore, shot stopper Prashanta emerging as our hero in the 1-1 (4-1) tie-breaker win.

We faced an uphill task against “hot favourite” Thailand in the semis, who had beaten the mighty Japan in the group stage. But we rose to the occasion and pipped the hosts 2-1, Yakoob and me once again finding the target.

Our opponent in the final Iran had pumped in 10 goals in the group stage. In the quarters and the semis, they had thumped Hong Kong and South Korea by 3-0 margins, without conceding a goal. Everyone not only tipped Iran to win but said they would teach us a footballing lesson. But we were supremely motivated and our performance surprised not only Iran and the Continent but also ourselves.

When our team bus moved alongside Iran’s bus towards the stadium for the final under police protection, we heard them singing, chatting and making merry, which indicated that they were brimming with confidence.

Our coaches Salaam bhai and Arun da commented, “The way they are behaving, it looks like they are taking us for granted. They are not showing us any respect, we have to show them we are no pushovers!” 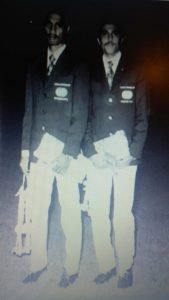 AD Devraj (left) and Mohammed Yakoob distinguished themselves in the tournament.

And indeed it turned out that way. We fought for every ball, never slackening our intensity. It was 1-1 at full time and we took the lead in extra time. Iran equalised in the dying minutes of the game to make it 2-2 (Latifuddin and myself scored, my fifth in the tournament). It was then decided that we would share the trophy.

Our feat drew praise from even the then Prime Minister Indira Gandhi. Several members of that squad like Prashanta, Prasun, Latifuddun and myself got into the senior team that very year. Others like Palit, Jacob, Harjinder and Devraj got the nod a little later.

The All India Football Federation (AIFF) should have kept the team together but in those days things were different – all we had was a one month camp/tournament and that was that! But I am not complaining.

I later heard that the Iranian players received a house and a car each for becoming joint champions. We were felicitated by Mohun Bagan, who presented each player with a leather suitcase. We were received at the Calcutta airport by the then AIFF president M Dutta Ray.

Of that bunch of achievers, Salaam bhai, Dilip-da, Prashanta, Yakoob, Devaraj and Latifuddin are no more.  This article is a tribute to the departed (though they are still fresh in our collective memories) as well as to those who are still alive.