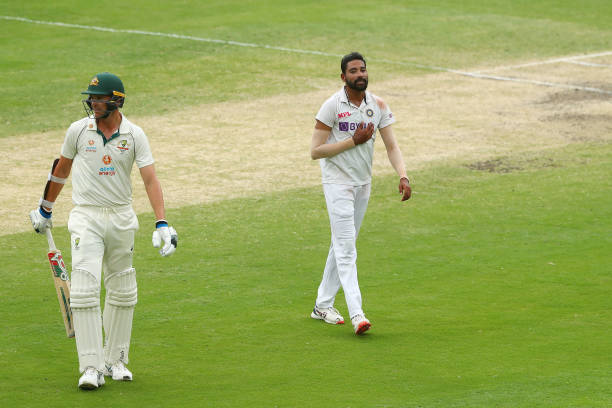 Brisbane: Right-arm pacer Mohammed Siraj, who on Monday picked five wickets for 73 to become only the fifth Indian bowler to pick a five-wicket haul in a Test at The Gabba, has shown remarkable level of fitness throughout the four-match rubber against Australia.

Siraj has bowled 134.1 overs, the most by an Indian bowler in the current series which saw the entire frontline attack get benched due to injuries before the fourth and final Test even began.

He has ended up being India’s highest wicket-taker in the series with 13 scalps. Add to that, he has manned the outfield energetically.

He attributed this fitness level to regular work at home during lockdown.

“I need to thank Soham bhai (Soham Desai, the strength and conditioning coach at the National Cricket Academy) who designed a program for me and backed my training. Fitness is very important.

“I have been working on it since lockdown. I used to get regular programs from him, which I used to follow during the lockdown as well. I realise now how important fitness is, especially in Test cricket,” said Siraj at the end of the fourth day’s play.

The right-arm pacer, who made his Test debut at the Melbourne Cricket Ground during the Boxing Day Test, has had a very emotional tour. He lost his father a few days after he arrived in Australia but couldn’t return home to attend his burial due to strict quarantine rules that would have taken a lot of time.

He was then subjected to alleged racial taunts by a section of the crowd in Sydney — a matter that forced Cricket Australia to launch an investigation and issue an apology.

Asked how he felt about achieving success on a tour that may have drained him emotionally, Siraj said he has no words to describe it except being grateful to get a chance to fulfill his father’s dream.

“First of all I need to thank God that I got this opportunity to play for India. It was my dad’s desire to see his son play with the entire world watching him play. Wish he were here to see this. He would have been very happy. It were his prayers that enabled me to take five wickets today. I am speechless, have no words to describe this,” said Siraj.

“I am very grateful that I got five wickets. It was a very tough situation with dad having passed away. I talked to folks at home, spoke to mom. They encouraged me, made me feel strong. I got mentally strong with their support. I felt that whatever was dad’s desire, I have to fulfill that. It got fulfilled,” he added.

Despite just two Tests under his belt prior to the Brisbane Test, Siraj was the senior-most of the India bowling attack to take field at The Gabba. India fielded two debutants, Washington Sundar and T Natarajan, while Shardul Thakur and Navdeep Saini had played just one Test each before.

“It is not about seniority. Whatever cricket I played for India A or at domestic level, it helped me gain a lot of confidence. I missed Jassi bhai (Jasprit Bumrah) in this game. He wasn’t there. I was being called the senior bowler. So I tried to shoulder responsibility,” he said.

The 26-year-old got the wickets of Marnus Labuschagne and Steve Smith through beautiful deliveries, the one to Smith being almost unplayable.

Both the deliveries got big on the batsmen as they were caught behind the wicket. Matthew Wade, Mitchell Starc and Josh Hazlewood were his other three scalps.

Siraj said that he wanted to keep it tight during Australia’s second innings.

“My job was to build pressure, not try much and put the ball in one spot. I thought that will be good for the team and me. We have to bowl in one area and the same channel for a while before surprising the batsman,” he said.

India, eventually, bundled out Australia for 294 in their second innings, thus setting themselves a target of 328. They reached 4/0 before rain stopped play and subsequently umpires were forced to call for early stumps on Day Four. Rohit Sharma and Shubman Gill remained unbeaten on 4 and 0, respectively.

Boy to man: Former stars laud transformation of Siraj Down Under