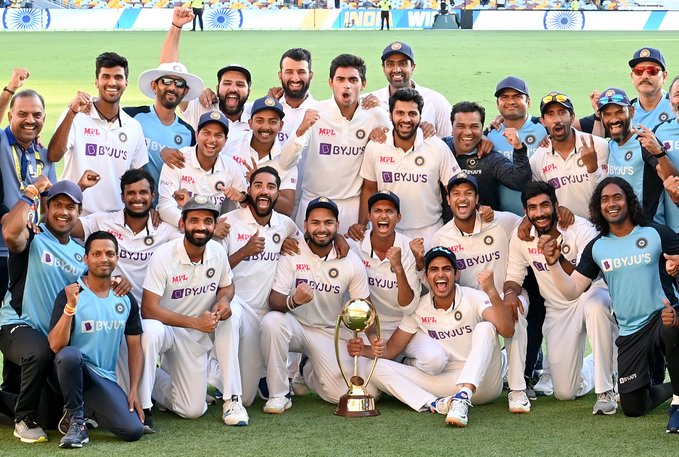 Brisbane: Team India’s history-making win in the fourth and final Test to retain the Border-Gavaskar Trophy has the entire country flooding them with superlatives.

The memorable win drew delirous reactions from the cricketing fraternity, Bollywood stars as well as the Prime Minister Narendra Modi.

A look at the top reactions:

EVERY SESSION WE DISCOVERED A NEW HERO.
Every time we got hit, we stayed put & stood taller. We pushed boundaries of belief to play fearless but not careless cricket. Injuries & uncertainties were countered with poise & confidence. One of the greatest series wins!
Congrats India. pic.twitter.com/ZtCChUURLV

@ajinkyarahane88 led the side brilliantly, giving a lot of confidence to youngsters and Pujara exhibited his steely resolve once again. Can’t forget the young bowling unit. Fantastic team effort💪💪 #AUSvsIND

Many congratulations Team India for the fabulous show of character and skill. A wonderful test series with the perfect result. Hopefully the end of discussion of 4 day tests for a while. #INDvsAUS

Just a remarkable win…To go to Australia and win a test series in this way ..will be remembered in the history of indian cricket forever ..Bcci announces a 5 cr bonus for the team ..The value of this win is beyond any number ..well done to every member of the touring party..

We are all overjoyed at the success of the Indian Cricket Team in Australia. Their remarkable energy and passion was visible throughout. So was their stellar intent, remarkable grit and determination. Congratulations to the team! Best wishes for your future endeavours.

WHAT A WIN!!! Yessssss. To everyone who doubted us after Adelaide, stand up and take notice. Exemplary performance but the grit and determination was the standout for us the whole way. Well done to all the boys and the management. Enjoy this historic feat lads. Cheers 👏🏼🇮🇳 @BCCI pic.twitter.com/CgWElgOOO1

India had many players injured, but what has been injured more has been the Australian arrogance & pride.
The test series has been like a movie with every member of Indian Team being a hero & some of them Superheroes.
Spiderman Spiderman tune churaya dil ka chain @RishabhPant17 pic.twitter.com/5psVFjp5Ww

What a Test match! The depth of Indian Cricket is scary. @RishabhPant17 , sweet number 17. Well played young man. #testcricket at its very best

Wow .. That has to go down as one of the greatest if not the greatest Test victory of all time !! Egg on my face over here in the UK .. but I love to see character & skill .. India have it in abundance .. btw @RealShubmanGill & @RishabhPant17 are future superstars ! #AUSvIND

Great..Great Job India..!! Winning the series after the dismal 36 is simply out of this world..Congrats @ajinkyarahane88 for breaking the jinx of Gabba…Super..Super team effort..Hail India..!!

Another great milestone by my brother @RishabhPant17 achieving 1000 Test Runs at Gabba, what a beautiful sight it has been watching you play today for our country, keep going!👏 #AUSvIND ❤️❤️👌✅☝️@BCCI pic.twitter.com/2OVbCKvJlH