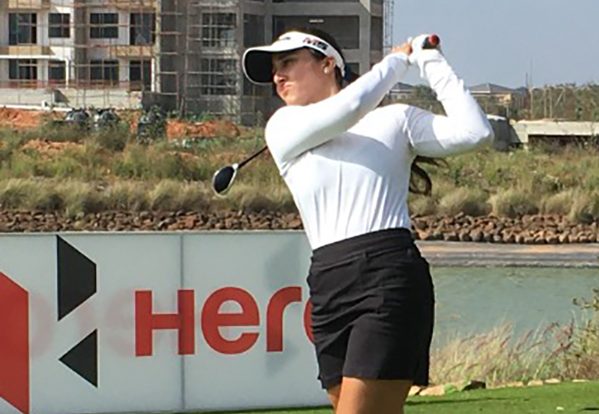 Bengaluru: Ridhima Dilawari played some stunning golf over the last 10 holes to card five-under 67 and open up a massive six-shot lead at the end of the second round of the first leg of the Hero Women’s Pro Golf Tour at the Prestige Golfshire in Bengaluru.

Ridhima is six-under 138 for 36 holes, while her nearest rival, local Bengalurean Pranavi Urs (71), moved into second place at even par 144.

Vani Kapoor, third in the first round, stayed there despite a two-over 74 while Amandeep Drall had a rare off-day with a 78 that included a crippling quadruple bogey on Par-4 seventh hole. Amandeep shared the fourth place with Seher Atwal (75) and Ananya Datar (76).

The story of the day was Ridhima Dilawari, winner of five events in 2019 and once in 2020. Ridhima said she had been working on various aspects of her game during the break between the last season and the new one, and also during the Covid-enforced hiatus.

Following up on her first round 71, she added a 67 with six birdies and just one bogey in the round.

While her first round commenced with a double bogey, the second round had a bogey on the second hole but after that she did not put a foot wrong. She parred six holes in a row from third to eighth before her first birdie of the day on the ninth. She turned in even par.

On the back nine, Ridhima was on fire with birdies on 10th and 13th and then closed the round with three birdies in a row from 16th to the 18th.

Pranavi, who in 2020 won consecutive events with different status – first as an amateur then as a pro at the very next event – had three birdies against back-to-back bogeys on 14th and 15th.

Vani Kapoor had just one birdie and dropped bogeys on second, fourth and 10th for her 73.

Amandeep Drall had highly contrasting first and second rounds. After a steady 71 on the first day, she carded a 78 largely because of one disastrous hole at the Par-4 seventh where she had an eight. She had three other bogeys and just one birdie for the day.

Unless there is a drastic reversal of form, Ridhima should cruise to a win in the first leg, while Pranavi, hoping for a fast start, will seek to get closer to the leader.

The lead group sees Ridhima Dilawari with Pranavi Urs and Vani Kapoor, while Amandeep Drall goes out with Ananya Datar and Seher Atwal in the second to last group.