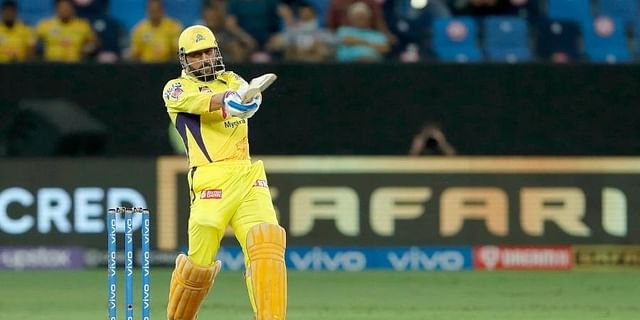 DC though will get another shot at making it to the final when they meet the winner of the eliminator between KKR and RCB scheduled Monday.

What a game of cricket that was! #CSK, they are now in Friday’s Final of #VIVOIPL pic.twitter.com/eiDV9Bwjm8

Earlier, Chennai Super Kings captain MS Dhoni won the toss and elected to bowl first against Delhi Capitals in Qualifier 1 of IPL 2021 at the Dubai International Stadium here on Sunday.

Needing 13 off the last over, Dhoni hit a square cut, got a bit of luck going his way and then pulled DC’s best bowler Tom Curran for the most celebrated T20 boundary of recent times.

Before that, he had just slapped Avesh Khan for a six over mid-wicket.

Curran and Avesh weren’t bad but it was one of those days, the cricketing Gods wanted the 40-year-old to finish it in style.

It was all about turning the clock back for the former India captain who has struggled to finish for years but ‘Cometh the Hour, Cometh the Man’ as he did once more for his favourite cricket team.

After the win, his emotional wife Sakshi was engaged in a beer hug with daughter Ziva which would tell what it meat to the family.

It was just six balls and in that he missed a couple and got boundaries off the rest.

Robin Uthappa (63 off 44 balls) turned the clock back to his halcyon days being the pace setter in company of the irresistible Ruturaj Gaikwad (70 off 50 balls).

After Faf du Plessis was bowled by Kagiso Rabada, Uthappa decided to counter attack with such ferocity that it caught the Delhi Capitals completely unawares.

Here was a player, who has been out of circulation for quite some time but with in-form Gaikwad (70 off 50 balls), he added 110 runs as DC looked down and out after the first 10 overs.

Uthappa looked like his old self, something that made him a formidable T20 player back in the day, who would win matches and IPL titles for Kolkata Knight Riders for fun.

There were drives, the reverse sweep, the Uthappa pull-shot and those shots while he also shimmied down the track to unsettled the line of the bowlers.

In all, he hit seven fours and two sixes before a brilliant piece of fielding by Shreyas Iyer at long-on boundary off Tom Curran.

Iyer almost collided with Axar Patel but kept his balance to throw the ball in and catch it on second attempt.

He then took a catch to dismiss pinch-hitter Shardul Thakur while Ambati Rayudu was run-out due to a brilliant combination from Iyer and Rabada.

Gaikwad still played his shots despite a mini-collapse before a nice catch by Axar in deep off Avesh Khan made it 25 off 11 balls before Dhoni came in.

Earlier, Rishabh Pant showed no signs of his self-confessed “nervousness” as his unbeaten 51 off 35 balls propelled Delhi Capitals to a competitive score of 172/5.

Pant got an ideal support from his buddy Shimron Hetmyer (37 off 24 balls) as the duo added 83 runs for the fifth wicket with some breathtaking shots towards the end of the innings.

Pant hit three fours and two sixes as Delhi Capitals didn’t ultimately pay the price for playing a specialist batter short as they capitalised on a blazing start provided by opener Prithvi Shaw (60 off 34 balls), who took the opposition on with seven fours and three sixes.

Coming together at 80 for 4, Hetmyer and Pant initially just nudged around for a few singles and doubles before the flamboyant Caribbean pulled a short one from Moeen Ali for a six.

He then bisected the off-side field off Dwayne Bravo for a boundary.

Pant, who was being kept quiet by the spinners, finally showed some spark with his trademark one-handed six off Shardul Thakur.

Once they had put on a half-century partnership, Pant and Hetmyer did start throwing their bats around at the back-end when the pacers once again were back in operation.

If Hetmyer thumped Josh Hazlewood (4-0-29-2) over his head, Pant whipped him towards deep mid-wicket to bring up the 150 for the team.

But a lot of credit should go to Shaw as he played his best knock of the tournament.

He started with a pulled four and a six off Hazlewood, funnily both mis-timed shots.

The first flew over slips and the next one was top-edged behind wicketkeeper with enough wood on the leather to go the distance.

However Deepak Chahar’s second over turned out to be a nightmare for the seamer as he was smashed for four boundaries — first a streaky inside edge followed by two square cuts on either side of a flick.

While Shikhar Dhawan (7) and Shreyas Iyer (1) were dismissed by Hazlewood within the Powerplay, Axar Patel (10) was promoted without much success.

Shaw, however, continued with his ‘see-the-ball, hit-the-ball’ formula as he lofted Shardul Thakur for two sixes.

As he reached his fifty off only 27 balls, he was piercing the off-side field regularly even as Axar perished failing to get the desired distance while trying to loft Moeen Ali.

The seasoned pair of Moeen Ali (1/27 in 4 overs) and Ravindra Jadeja (1/23 in 3 overs) suddenly stifled the runs post Powerplay with some measured bowling which led to Shaw trying to loft the left-arm spinner inside-out.

Then, Pant and Hetmyer took charge of DC’s batting to post a safe total.