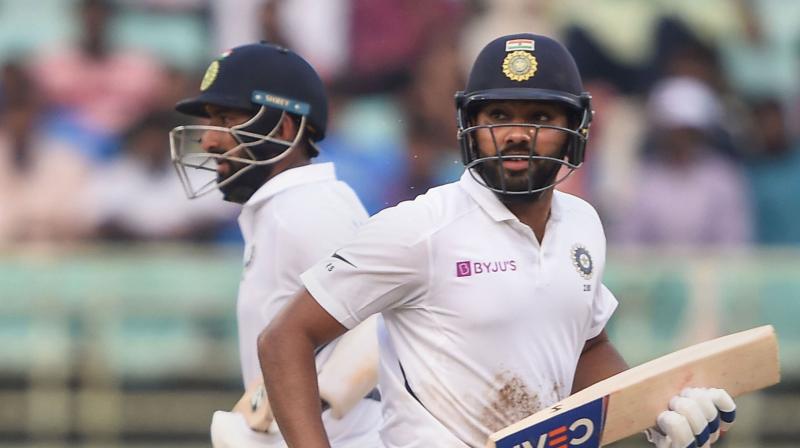 Indore: Senior India cricketers Rohit Sharma, Cheteshwar Pujara and Ravichandran Ashwin got a first feel of playing with the pink ball under lights during a day-end net session at the Holkar Stadium.

With only two training sessions are possible under lights before the day/night Test at the Eden Gardens starting November 22, the Indian team is trying to make most of the time at their disposal.

Couple of days before the first Test, skipper Virat Kohli and other top-order batsmen had a throwdown session in the afternoon but Friday was the first time when they had a nearly 35-minute session under lights.

It was opener Rohit and premier spinner Ashwin, who spend considerable time in one of the nets with head coach Ravi Shastri keeping a close watch on the proceedings.

Skipper Virat Kohli spoke about adjusting to the new colour under lights and that precisely was the exercise as the two senior players faced each other.

Ashwin bowled with the semi-new ball as Rohit and later Pujara also had a go. In the other nets, reserve batsmen Hanuma Vihari and Shubman Gill faced throwdown experts Raghavendra and Nuwan Seneviratne.

But it was the first net on which all eyes were trained on as Rohit was seen trying to give Ashwin the charge. Rohit and Pujara took turns to face Ashwin and Kuldeep Yadav.

Kuldeep incidentally was very effective during the first Duleep Trophy that was played with pink Kookaburra balls as the batsmen were unable to pick the seam when the left-arm wrist spinner would flight the deliveries.

Kohli, his Test team deputy Ajinkya Rahane and Ashwin have all spoken in unison that pink ball with more lacquer will swing more and fast bowlers are expected to remain in business for a fair amount of time.

“Obviously, it’s a challenge to play with the pink ball. The ball has a lot more lacquer. I haven’t even bowled a single ball with the pink ball. Obviously I just saw it. Sometimes I don’t understand if its orange or pink, still coming to terms with that,” Ashwin had said on Thursday after the first day’s play against Bangladesh.

Kohli, on his part, said that he would be interested to find out how the “old ball behaves and how the dew conditions can be countered”.

Rahane said that with pink SG expected to swing more than the traditional ‘SG Test’, the batsmen “need to play late and close to their body”.