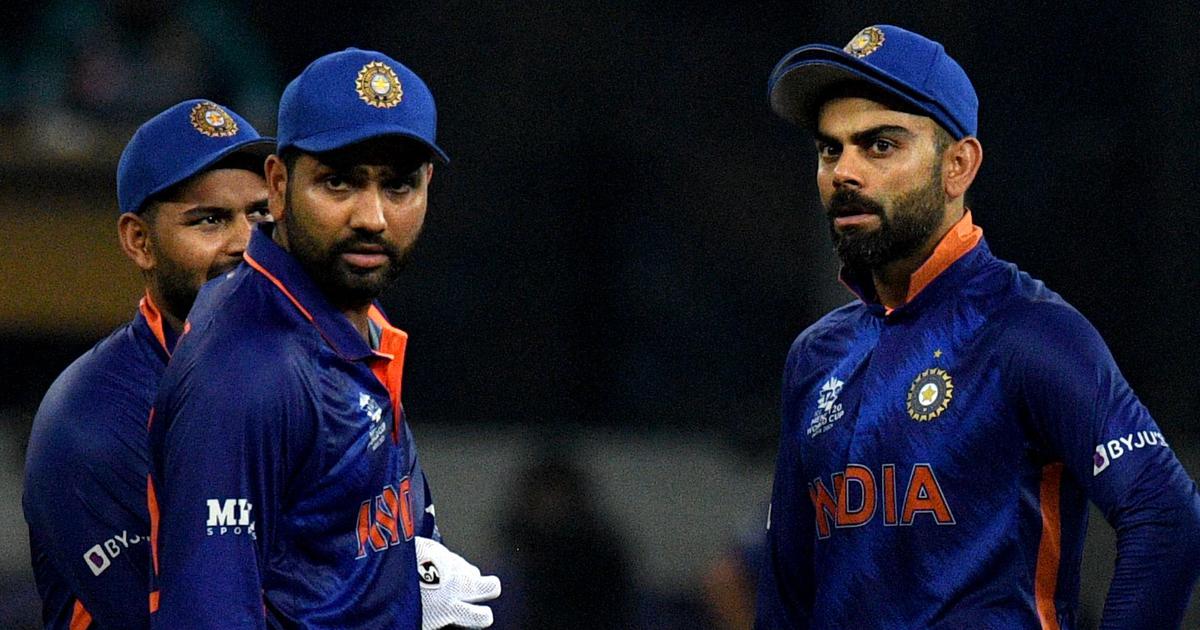 Nottingham: Following the continuation of Virat Kohli’s disappointing run of form in the final T20I against England, Indian skipper Rohit Sharma expressed disagreements with former skipper Kapil Dev’s comments about the star batter’s place in the team, saying that he is watching the game from the outside and does not know what is happening inside.

Virat Kohli’s disappointing run of form continued in the T20I series against England, as he could manage only 12 runs in his two innings.

“He is watching the game from outside and does not know what is happening inside. We have our thought process. We build our team and behind this, there is a lot of thinking. We back the boys and give them opportunities. So, these things you do not get to know from outside. So, whatever is happening outside is not important but what is happening inside is more important for us,” said the skipper during a post-match press conference referring to Kapil Dev’s statement on Kohli.

“If you talk about form then everyone goes through ups and downs. The Player’s quality does not get affected. So, we should keep these things in our minds. When a player is doing well for so many years, then one or two bad series does not make him a bad player. We should not overlook his past performances. We who are in the team know the importance of the player. They have got all the right to talk about it but it does not matter for us too much,” he added.

Earlier Kapil Dev had said that if a bowler of spinner Ravichandran Ashwin calibre could be left out of the Test side, so could Virat Kohli.

Ashwin did not feature in a single match in the recently concluded five-match Test series against England.

“If world No. 2 Test bowler Ashwin can be dropped from Test side then your No. 1 batter can also be dropped,” Kapil stated.

“If he (Virat) is not performing, you cannot continue to keep these boys (youngsters like Deepak Hooda) out. I hope there is a healthy fight for selection, the youngsters should look to outperform Kohli. But Kohli needs to think, ‘Yes at one point I was a big player, but I need to play like that No. 1 player again’. That is a problem for the team, it is not a bad problem,” Kapil Dev added.

On Suryakumar Yadav’s explosive 117 in the final T20I, the skipper Rohit termed it as one of the best T20I innings he had ever seen.

“When you are chasing a big total, come out and bat like he did, shows the quality of the batter. We were three down and wanted that partnership to go as long as possible. He pretty much did everything right today. Disappointed that he was not there till the end, but it takes nothing away from his knock. You do not get to see that too often. We will take that with both hands as a team. He has shots all over the ground, it is a very rare quality that a batter can have. It is a good sign for us to have a player like that in the squad,” he added.

He said that winning a series in England gives the side a lot of confidence.

Questioned about trying out different players throughout the series, Rohit said, “In Southampton, some boys were missing. Then in the next match, some came back, and then again, some were missing. T20 World Cup is coming. We have to rotate players and prepare them. To prepare them we have to give them chances to find out about their capabilities. When you have the series in your hands with a match left, it is the best chance to look at these boys. We see them in the IPL, where they do good. But pressure and gameplan is different in international cricket.”

Coming to the match, Suryakumar Yadav’s heroic century went in vain as India succumbed to a 17-run defeat to England in the third and final T20I of the series here at Trent Bridge in Nottingham on Sunday.

The inning was a disappointing one for India. They lost their top order within a very short time. A huge 119-run partnership followed between centurion Suryakumar Yadav (117*) and Shreyas Iyer (28) followed and gave India a chance in the match. But the English pulled back the game in their favour by taking wickets at crucial stages and denied Men in Blue a clean sweep. India has won the series 2-1.

While batting first, Half-century from Dawid Malan and a solid unbeaten knock from Liam Livingstone helped England reach a powerful 215/7 at the end of their innings in the third and final T20I against India here at Trent Bridge in Nottingham on Sunday. It was a great day for the English batting lineup as they clicked for the first time in the series and posted an intimidating total.

Knocks from Dawid Malan (77), Liam Livingstone (42) and Jason Roy (26) helped the cause of the hosts. Ravi Bishnoi and Harshal Patel were the best bowlers for India, getting two wickets each, while Avesh Khan and Umran Malik got one each.