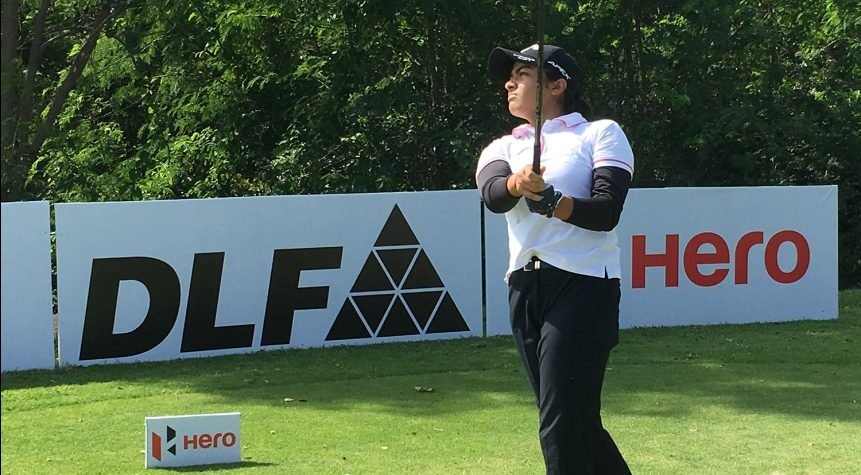 Gauri Karhade in action during final round

Hyderabad: Rookie Gauri Karhade playing only her sixth event as a pro on the Hero Women’s Pro Golf Tour, stunned the front runners, amateur Shreya Pal, and the seasoned Gaurika Bishnoi, to land her first title on the circuit. She stayed calm and held her nerve to shoot a final round of 73 for a total of two-under 214 and win the 12th Leg by one shot over Gaurika Bishnoi (75) and Afshan Fatima (70).

Afshan Fatima, who made a great charge on the front nine with a two-under 34, held the lead midway through the back nine but dropped crucial back-to-back bogeys on 15th and 16th to fall into a tie for second with Gaurika at one-under 215.

Playing the final group, overnight leader, Shreya Pal began with a flourish on the first with a birdie. But she dropped three bogeys in the next four holes. Gauri, starting the final day two behind leader Shreya and one behind Gaurika, was steady and she parred the first five holes, as Gaurika also dropped a shot on second.

Then it was Gauri’s turn to make a mistake with a double bogey on sixth, but Gaurika dropped a bogey on seventh and Shreya dropped a double bogey. That opened the door for Gauri. Meanwhile, Afshan was making a charge with three birdies against one bogey on the front nine.

After nine holes, it was still a very tight battle. Gaurika, who was four-under for two rounds, was still two-under after 45 holes. Four players, Shreya, Afshan, Gauri and Ananya Datar were at one-under after the front nine.

Gauri and Afshan both birdied the 14th at which stage Afshan was ahead at three-under and Gauri was two-under. Gaurika stayed at one-under. Shreya, now five-over for the day after a bogey on 12th, fell back to even par.

Then it was Afshan’s turn to make mistakes and she made two in a row on 15th and 16th that allowed Gauri to sneak ahead. She only had to stay calm and get her pars. She did just that. None of the three, including Gaurika, made birdies on the last two holes, leaving Gauri as the victor.

Gaurika, unable to find birdies the whole day, ended Tied-second with Afshan, who after a great 14 holes made crucial errors to throw away a chance.

Gauri, who started playing at the age of 10 and learnt her early lessons in Thane and Kharghar, has honed her skills at the Poona Golf Club and now resides in Mumbai.

Re-appointing Shastri not due to Kohli’s support, says Kapil Dev