Mumbai: Everything fell into place in the Pune match for India. They won the toss and batted on a batting-friendly pitch. Everyone predicted that the wicket would be a turner but it was far from it.

As predicted in these columns the pitch curator Pandurang Salgaonkar, who was unnecessarily made the scapegoat for the Pune pitch fiasco in 2017, sprayed a tinge of grass on the 22 yards.

The red soil on which the pitch is made requires a lot of water for nourishment. Grass helps to bind the pitch together. In the morning there was a bit of seam movement and carry for the pacers.

The ball came on to the bat, enabling strokemakers to go for their shots, which wasn’t the case at Vizag where the ball kept low and the wicket was slow.

India made perfect use of the pitch, piling up a huge first innings score and then declaring at an opportune time to capitalise on the tired minds and legs of the South Africans. Not only the batsmen, the bowlers too excelled. They had a plan in place to dismiss the South Africans.

That will be it. #TeamIndia win the 2nd Test by an innings & 137 runs. 2-0 🇮🇳🇮🇳 #INDvSA @Paytm pic.twitter.com/pt3PPffdQt

For the last three years, the Indian team has adopted a horses for courses approach in Tests. The inclusion of wicketkeeper Wriddhiman Saha was a classic example. Rishabh Pant is talented and young. He got his chance but couldn’t cement his place, paving the way for Saha.

After the third day at Pune, the pitch became dusty and the ball started turning. Saha showcased all his skills while keeping against the tall Ravichndran Ashwin. He made keeping look easy, particularly the diving catches he took on both sides of the wicket.

Saha is by far the most technically accomplished wicketkeeper in the world right now. England and Australian wicketkeepers are adept at keeping against pacers. But Saha keeps wickets on Indian conditions primarily to spinners at both ends of the wicket.

After Day Three in Pune, the South Africans team became completely demoralised. The entire team was heartbroken as their captain Faf du Plessis admitted that Virat Kohli possessed answers for all questions asked of him by them.

Indirectly, du Plessis praised Kohli’s mental toughness. It is a trait that is contagious. Team India is supremely fit, be it mentally or physically, which make them supremely confident. They are like a family in a successful business venture.

After 4 Tests, India are now at the top of the points table of the ICC World Test Championship. 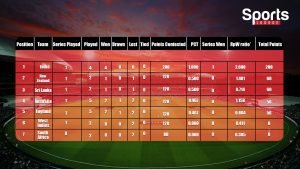 After their emphatic victories, India would continue with the same team. Way back in 1983, Sir Wesley Hall, who toured India as manager of the West Indies team told that the Windies team of the 60s and 70s were a combination of 5 batsmen, 5 bowlers and a wicketkeeper.

He had said, “If 5 batsmen cannot score 450 runs the sixth batsman is not going to do that and if 5 bowlers can’t take 20 wickets you cannot expect the sixth bowler to take any. You don’t expect bowlers to bat and vice versa. In that case a team would lose and they deserve to lose.”

Now, after so many years, India played with 5 bowlers. Towards the end of the third day, when the South Africans were all out in the first innings, the debate was about when India would enforce the follow on.

It is understood that the bowlers only told captain Kohli to enforce the follow-on. It was not a judicious move because the amount of Test matches these players nowadays play. But they did that and India won.

To maintain this momentum, India must continue with this combination. This Indian team is very competitive and for a place in the playing XI each and everybody will have to compete.

When Umesh Yadav didn’t get a chance to play in the Tests against the West Indies, he called up the selectors and requested them to let him play for India A.

He wanted to play rather than cool his heels. Because he wanted to keep himself ready whenever he was called up to play for Tests. He played a couple of matches for India A against South Africa A to get his rhythm back.

It’s like a musical instrument, if you don’t use it for days and when you’ll be called to perform, you’ll struggle. Yadav’s case is a perfect example of the healthy competitiveness that is present within the players in the squad, which augurs well for the future of Indian cricket.

Smith, Warner among most expensive players in ‘The Hundred’ draft

Tendulkar happy for change in Super Over rule by ICC