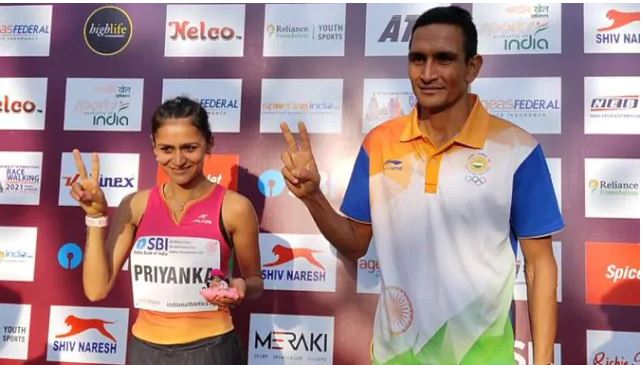 New Delhi: Haryana’s international athletes Sandeep Kumar and Rahul Kumar in the men’s event and Uttar Pradesh’s Priyanka Goswami in the women’s category won the 2021 Olympic Games quota places in the 20km event of the eighth National Race Walking Championships held in Ranchi on Saturday. It was double joy for Priyanka, as she broke the national record with her best effort of the current season.

It also turned out to be a memorable day for Priyanka. The 24-year-old international athlete from Uttar Pradesh crossed the line with a time of one hour 28 minutes 45 seconds, which was better than the Olympic qualification time of 1:31 seconds for women. It was her season’s best performance and a national record of 1:29.54 secs, set last year by Bhawana Jat of Rajasthan.

On Saturday, Bhawana, who had qualified for the Tokyo Olympics last year, finished second in the race with a time of 1:32.59 secs. Sonal Sukhwal of Rajasthan finished third in 1:36.05 seconds.

With three individual athletes winning Olympic quota place on Saturday, the tally of qualifiers in race walking events has increased to five.

In 2019, Olympian KT Irfan (20km) was the first Indian athlete to achieve the Olympic qualification time in the Asian Championship, held in Nomi, Japan. His fourth-place finish time of 1:20.57 seconds was inside the qualification time of 1:21 secs. On Saturday, however, Irfan quit the race at 19km mark.