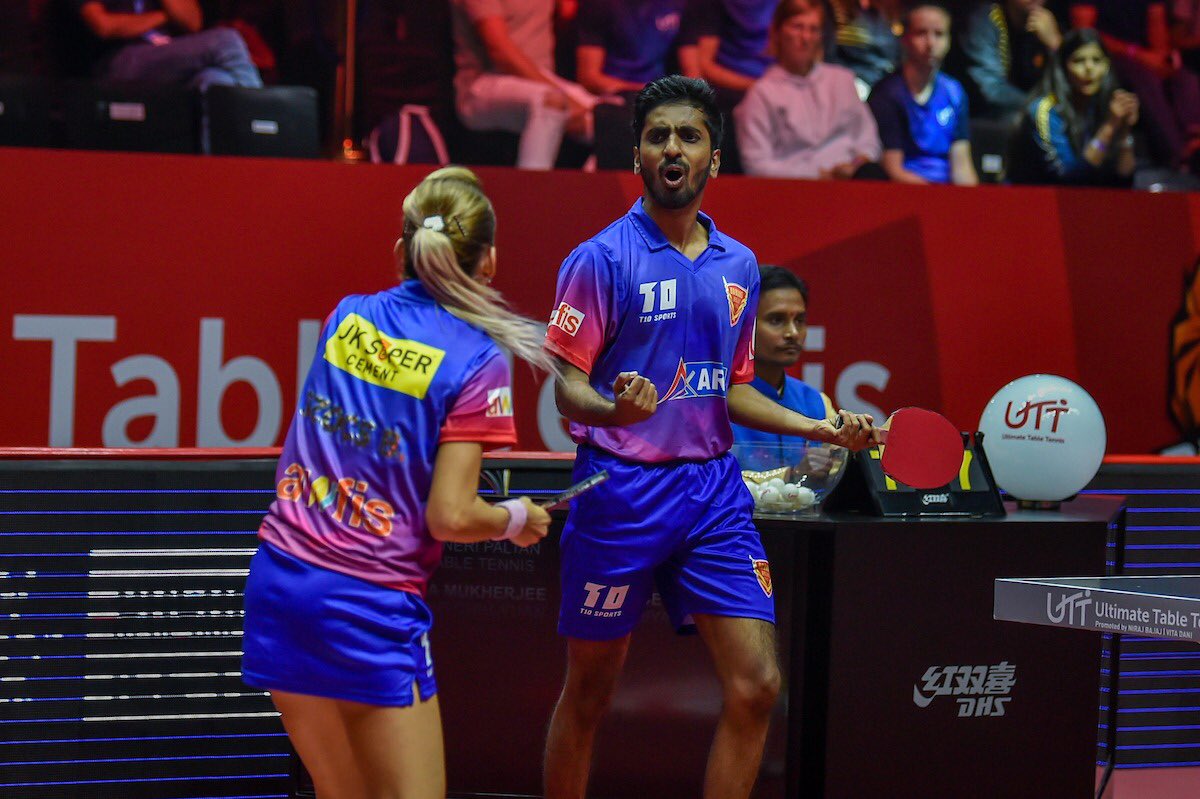 G Sathiyan helped Dabang Delhi to a golden victory against U Mumba.

New Delhi: Dabang Delhi TTC’s Sathiyan Gnanasekaran played out of his skin to seal a golden victory against U Mumba TT in the Ultimate Table Tennis here on Monday.

The young U Mumba team showcased all-round performance but Dabang Delhi got better of them.

World No. 24 and the highest-ranked men’s player in the tournament, Sathiyan first paired up with Romania’s Bernadette Szocs to clinch two points in the Mixed Doubles category before overcoming a valiant Manav Thakkar in the reverse Men’s Singles 3-0.

Sathiyan needed to invoke golden points to get the better of young Manav in the first two sets.

The last set came much easier, sealing the tie for Dabang in the fourth clash itself as they had already taken 3 points in their earlier matches, with their Swedish import Jon Persson cornering 2 points and Szocs 1.

In the fifth and final game, U Mumba’s Sutirtha Mukherjee beat Krittwika Sinha Roy 2-1 to reduce the overall deficit.

The Delhi-Mumbai encounter, that saw a plethora of golden points, began with the two teams trading the first wins. World No. 12 Doo Hoi Kem handed the Mumbai team an initial advantage, defeating Szocs in a thrilling Women’s Singles encounter.

A perfect way to start your day! 🤩🌜

But Hong Kong’s Doo had to battle for every point against the diminutive Szocs (World No. 19) in a battle of equals. The first two games were locked 10-10, and Doo’s belligerence came to her rescue as she pounced on both the golden points.

Szocs, however, reduced the deficit in the third game, winning it 11-8.

Dabang’s march to victory began in the next game, with Jon Persson also relying on two golden points to overcome young Kirill Gerassimenko from Kazakhstan. He lost the last game to make it 3-3 overall.

The Mixed Doubles began on an ominous note for U Mumba, with Sathiyan-Bernadette racing away to an 11-2 win in the first set.

Manav-Hoi Kem, however, discovered their mojo midway through the next set, clambering from 4-7 to make it 7-all. They conceded only one more point after that to make it 1-1.

Sathiyan-Bernadette sprinted away to 7-4 once again, only to find Manav-Hoi Kem clawing back to 7-7. But this time the Delhi duo handled the pressure better to win it 11-8, giving them a slight 5-4 advantage.

The reverse Men’s Singles saw two of India’s finest paddlers, one an established star and the other a rising one, dish out a stunning spectacle. The game literally went neck and neck, apart from the time when Manav grabbed 3 straight points from 2-2. Eventually, Sathiyan took the set on golden point.

The second set too was equally close, this time none of them managing to ever take more than a single point lead. Sathiyan saved two golden points to score a memorable win.