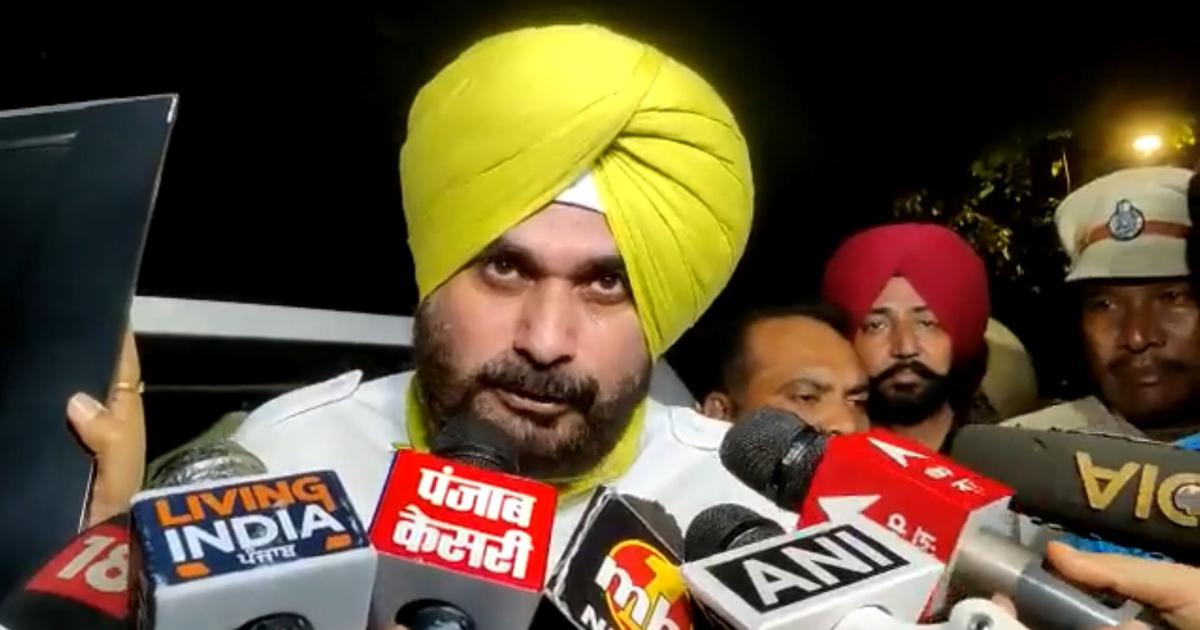 New Delhi: Observing that consequences of loss of temper must be borne, the Supreme Court on Thursday enhanced the sentence of Congress leader Navjot Singh Sidhu to one-year rigorous imprisonment in a 1988 road rage incident in which a 65-year-old man had died.

Sidhu, 58, took to Twitter to say he “will submit to the majesty of law” as the cricketer-turned-politician rode an elephant in Patiala earlier in the day to register a symbolic protest against rising prices of essential commodities.

According to Additional Solicitor General of India Satyapal Jain, Sidhu is left with no other option but to surrender before police.

If Sidhu does not surrender, police will have to arrest him, officials said.

He will then be put in Patiala jail, they said.

The apex court said in the given circumstances, tempers may have been lost but then the consequences of the loss of temper must be borne, adding any “undue sympathy” to impose an inadequate sentence would do more harm to the justice system and undermine the public confidence in the efficacy of law.

The court, which gave its verdict while allowing the review plea filed by the family of the victim on the issue of sentence, said the principle of just punishment is the “bedrock of sentencing” in respect of a criminal offence.

Though the apex court had in May 2018 held Sidhu guilty of offence of “voluntarily causing hurt” to Gurnam Singh, who was declared dead in a hospital, it spared him a jail term and imposed a fine of Rs 1,000.

Gurnam’s family thanked the Almighty and said they are satisfied with the jail sentence for Sidhu.

“We thank Baba Ji (Almighty). We had left it to Baba ji. Whatever Baba Ji has done is right,” said Parveen Kaur, daughter-in-law of Gurnam “We thank God,” said Sabby Singh, the grandson of Gurnam, whose family resides at Ghalori village, five km from Patiala city.

Sidhu, a former chief of the Punjab Pradesh Congress Committee who was at loggerheads with former Chief Minister Amarinder Singh ahead of the Assembly polls in Punjab early this year, has the option of filing a curative petition– the last judicial corrective measure which can be pleaded for in any judgment or decision.

“No comments,” Sidhu told reporters when asked about his reaction to the court verdict.

In its 24-page judgement, the bench deliberated on the necessity of maintaining a reasonable proportion between the seriousness of crime and the punishment.

A bench of Justices A M Khanwilkar and S K Kaul said the road rage incident is a case where some “germane facts for sentencing” appear to have been lost sight of while imposing only a fine on Sidhu.

Observing that hand can also be a weapon by itself where a boxer, wrestler, cricketer or an extremely physically fit person inflicts a blow, the court said it does believe that indulgence was not required to be shown at the stage of sentence by only imposing fine and letting Sidhu go without any imposition of sentence.

“The result of the aforesaid is that the review applications/petitions are allowed to the aforesaid extent and in addition to the fine imposed we consider it appropriate to impose a sentence of imprisonment for a period of one year rigorous imprisonment to be undergone by respondent no.1 (Sidhu).”

It said some material aspects which were required to be taken note of appear to have been somehow missed out at the stage of sentencing, such as physical fitness of Sidhu as he was an international cricketer, tall and well-built and aware of force of a blow that even his hand would carry.

“The blow was not inflicted on a person identically physically placed but a 65-year-old person, more than double his age. Respondent no. 1 (Sidhu) cannot say that he did not know the effect of the blow or plead ignorance on this aspect.”

“It is not as if someone has to remind him of the extent of the injury which could be caused by a blow inflicted by him. In the given circumstances, tempers may have been lost but then the consequences of the loss of temper must be borne,” the court said.

According to the prosecution, Sidhu and his aide Rupinder Singh Sandhu were in a Gypsy parked in the middle of a road near the Sheranwala Gate crossing in Patiala on December 27, 1988, when the victim and two others were on their way to a bank to withdraw money.

When they reached the crossing, it was alleged that Gurnam Singh, driving a Maruti car, found the Gypsy in the middle of the road and asked the occupants, Sidhu and Sandhu, to remove it.

This led to heated exchanges and Gurnam was beaten up in the scuffle and later taken to hospital where he was declared dead, the prosecution said.

Sidhu was acquitted of murder charges by a trial court in September 1999.

However, the Punjab and Haryana High Court in December 2006 reversed the verdict and held Sidhu and Sandhu guilty under section 304 (II) (culpable homicide not amounting to murder) of the IPC.

It had sentenced them to three years in jail and imposed a fine of Rs 1 lakh each on them.

The apex court on May 15, 2018, set aside the high court order but had held Sidhu guilty of causing hurt to a senior citizen.

This verdict had come on the appeal filed by Sidhu and Sandhu challenging the high court’s conviction.

The top court had also acquitted Sandhu of all charges saying there was no trustworthy evidence regarding his presence along with Sidhu at the time of the offence.

In September 2018, the apex court had agreed to examine the review petition filed by the family members of the deceased and had issued notice, restricted to the quantum of sentence.

The bench on Thursday noted that the top court, to some extent, had been indulgent in ultimately holding him guilty of offence of simple hurt under section 323 of the IPC and the question is whether even on sentence, mere passage of time can result in a fine of Rs 1,000 being an adequate sentence where a person has lost his life by reason of the severity of blow inflicted by Sidhu, who was 25-year-old at that time, with his hands.

Section 323 (punishment for voluntarily causing hurt) of IPC entails a maximum jail term of up to one year or with a fine which may extend to Rs 1,000 or both.

It said insofar as the injury caused is concerned, the top court has accepted the plea of a single blow by hand being given on the head of the deceased.

“In our view, it is this significance which is an error apparent on the face of the record needing some remedial action.”

“While a disproportionately severe sentence ought not to be passed, simultaneously it also does not clothe the law courts to award a sentence which would be manifestly inadequate, having due regard to the nature of the offence, since an inadequate sentence would fail to produce a deterrent effect on the society at large,” the court said.