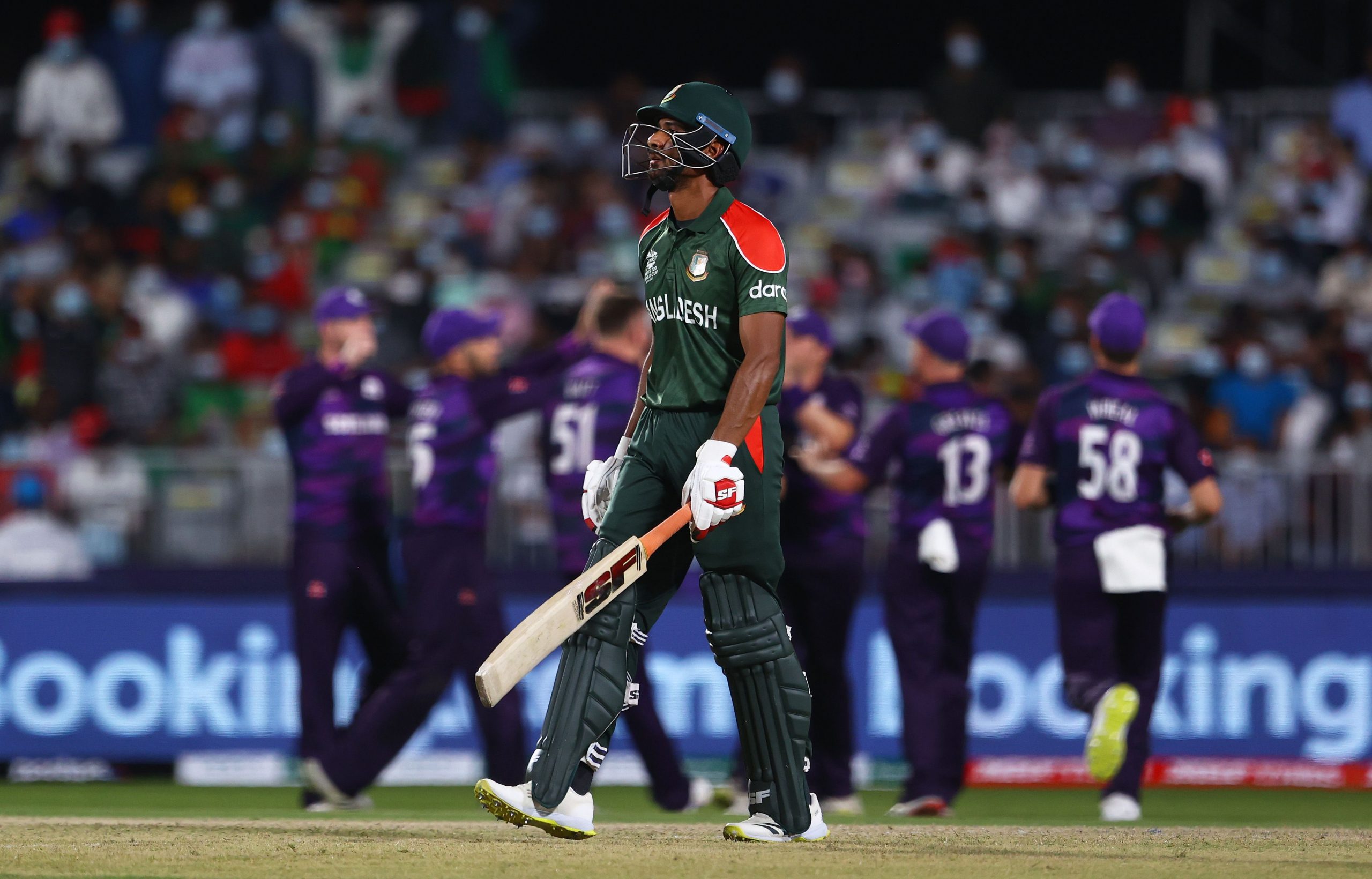 Greaves led a brilliant lower-order fightback with a 28-ball 45 as Scotland recovered from a hopeless situation to post 140 for nine in their first round Group B opener of the T20 showpiece.

Invited to bat first, Scotland were reeling at 53 for six in the 12th over before Greaves added 51 runs with Mark Watt (22 off 17 balls) to prop up Scotland.

In response, Bangladesh were stopped at 134 for seven in their allotted quota of 20 overs with Greaves returning excellent figures of 2/19 in three overs, which included the vitals wickets of star all-rounder Shakib Al Hasan (20) and the seasoned Mushfiqur Rahim (38).

This is Scotland’s second win in a World Cup, the first coming in the 2016 edition of the tournament against Hong Kong.

Needing 24 runs off the final over bowled by medium-pacer Safyaan Sharif (0/26), Mahedi Hasan (13 not out) and Mohammed Saifuddin (5 not out) could not pull off a miracle.

For Scotland, medium-pacer Brad Wheal (3/24 in four overs) and leg-spinner Greaves were the star performers with the ball, while Josh Davey (1/24) and Mark Watt (1/19) provided ample support.

Watt also followed up his performance with the bat with a superb bowling show.

Skipper Mahmudullah (23) and Afif Hossain (18) kept Bangladesh in the hunt with some innovative shots. Left-hander Hossain went for a big one off left-arm spinner Watt only to see Davey take a catch in the deep.

The Bangladesh batters did not have it easy against a disciplined Scotland attack. Soumya Sarkar (5) went for a big shot and failed to clear the fielder to leave Bangladesh at 8 for one.

Liton Das (5) too did not last too long, falling to a slower one from Wheal.

The experienced Shakib helped Mushfiqur add 47 runs for the third wicket before mis-hitting a half-tracker from Greaves for McLeod to run in and take a good catch.

Mushfiqur, another of the team’s vastly experienced player, opened up after a period of consolidation and hit two splendid sixes and looked to be in control before an attempted scoop shot off a good length delivery from Greaves saw his leg-stump knocked back to put Bangladesh in a spot of bother.

Earlier, Scotland were off to a poor start as they lost skipper Kyle Coetzer (0) to Saifuddin with just five runs on the board in the third over.

The spinners — Shakib and Mahedi Hasan — then took over and added to Scotland’s woes. Hasan snared two wickets in his first over as he dismissed wicketkeeper Matthew Cross (11) and George Munsey (29) after the two had added 40 runs for the second wicket.

This was after a brilliant display by Bangladesh bowlers in the power play as they restricted Scotland to 39 for one in the first six overs.

Shakib joined the party by getting rid of Richie Berrington (2) and Michael Leask (0) to leave Scotland tottering at 52 for five, which soon became 53 for six when Hasan picked up his third wicket in the form of Calum MacLeod (5).

Greaves, who hit four fours and two sixes, then came to their rescue with his runs to propel Scotland.