Serena Williams hoping to make it count in final appearance 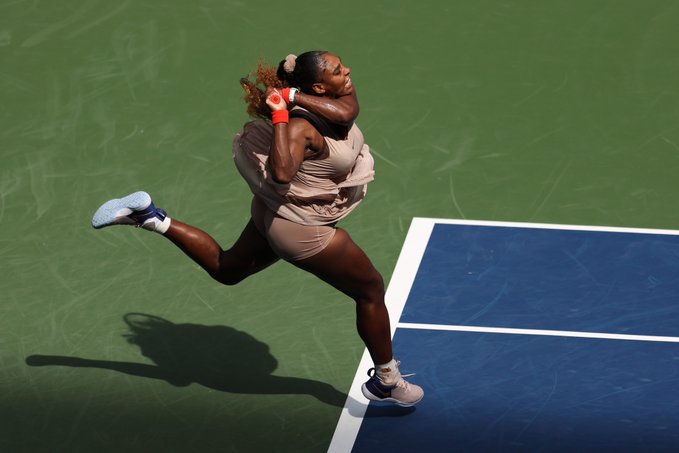 New York: Serena Williams rose from her sideline seat after a break during a training session inside Arthur Ashe Stadium, and as she walked to the baseline at the end of the court covered by shade on a steamy morning, a few voices from the stands called out in unison, “Serena, we love you!”

About to hit some serves in preparation for the first round of the US Open on Monday night — and what could wind up being the last singles match of her career — the 23-time Grand Slam champion did not break stride, although she did turn her head in the fans’ direction, acknowledging the sentiment with a smile.

Later, there were similar cries from the crowd and a couple of rounds of applause for Williams, who is also entered in doubles after she and her older sister, Venus, were given a wild-card entry by the US Tennis Association.

“It’s the end of a great career. And hopefully she can finish it off feeling good about herself and enjoying the moment and enjoying the crowd and listening to the people, to everyone, saying how much they love her,” said Rennae Stubbs, who won four Slam titles in women’s doubles and has been working with Williams, alongside coach Eric Hechtman, since last week. “She responds to that in a positive way and not in a negative way. She embraces it. My goal is to have her hopefully enjoy this moment.”

Novak Djokovic is missing a Grand Slam tournament for the second time this season because he is not vaccinated against Covid-19, and — combined with not earning any ranking points for his Wimbledon championship — his hold on No. 1 in the ATP rankings has slipped.

He’ll be No. 7 on Monday. Five men have a chance to be No. 1 after the US Open, and Rafael Nadal is among them. He has won four of his men’s-record 22 Grand Slam titles in New York, where he is competing for the first time since 2019.

The 36-year-old Spaniard is 19-0 in Majors this season, with trophies at the Australian Open in January and French Open in June, followed by a run to the Wimbledon semifinals in July before withdrawing because of a torn abdominal muscle, an injury he says is particularly “dangerous” and “risky” while serving now.

Current No. 1 Daniil Medvedev, the defending US Open champion, Carlos Alcaraz, Stefanos Tsitsipas and Casper Ruud need to reach the September 11 final to have a shot at topping the rankings the next day.

Naomi Osaka won two of her four Grand Slam titles at the US Open so might normally be considered a true contender to leave New York with another. She has not been at her best, however, entering her first-round showdown against Australian Open runner-up Danielle Collins on Tuesday night. Osaka, a former No. 1 now at No. 44, is on a three-match losing streak and is 2-6 since the start of April.

“I feel like I would have lied, like, a day ago or so and said that I was really relaxed. But actually, when I practiced today, I felt very anxious,” Osaka said.

US Open 2022: Serena to play Kovinic in R1 of last Grand Slam, Kyrgios to face Kokkinakis