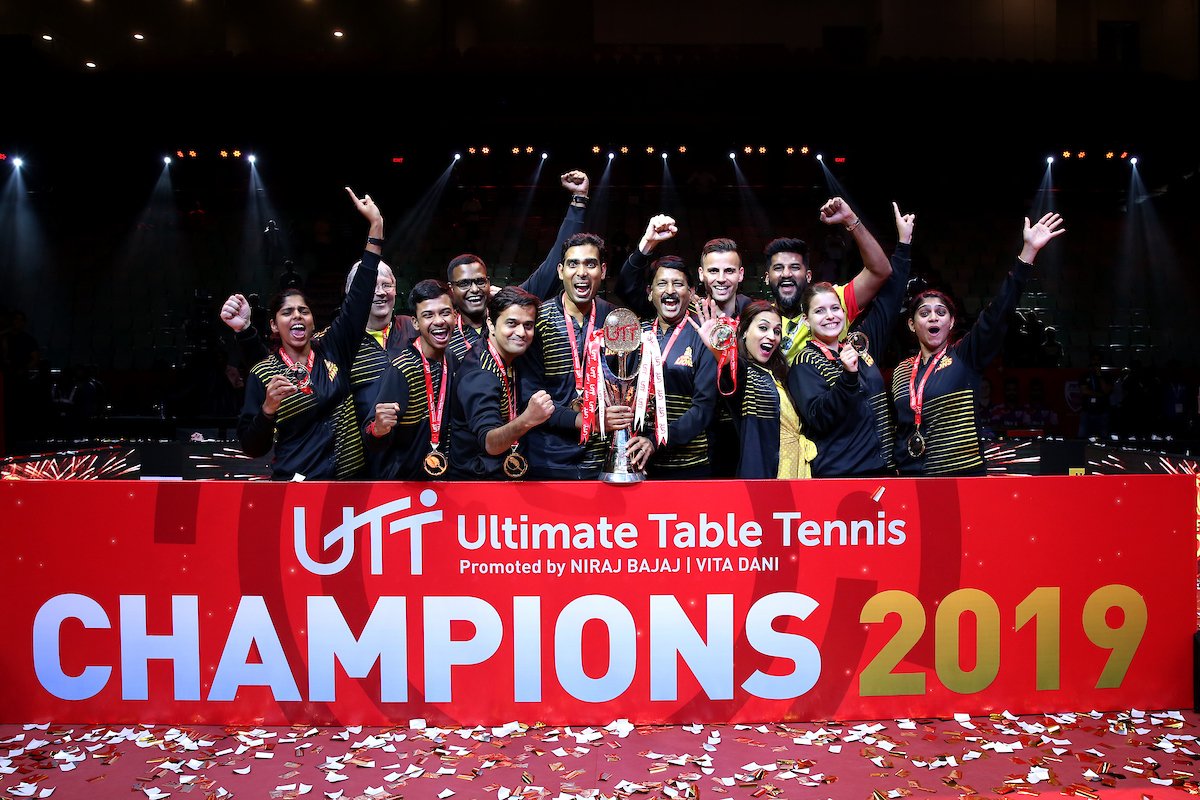 Chennai Lions with the UTT 2019 trophy

Sathiyan Gnanasekaran led Dabang Delhi was off the mark since from the inception of the final. Sharath Kamal along with Germany’s Petrissa Solja in the Mixed Doubles thrashed Delhi 8-1. Chennai cantered to the required 8 tie points in the first three matches itself, consigning the final two to the dustbin.

The Lions’ foreign imports, Germany’s Petrissa Solja and Portugal’s Tiago Apolonia, proved to be the stars of the grand finale, taming Bernadatte Szocs 2-1 and Sathiyan G 3-0 to take a formidable, and clearly unbeatable, lead.

Sharath and Petrissa then put up a master class in the Mixed Doubles, collating the last 3 needed points with utmost ease to clinch the title.

“This is an amazing win,” an exultant Sharath said after the victory. “We played near flawless table tennis and came up with the perfect plan for the final,” he added.

Rio Olympics silver medallist Petrissa Solja gave Chennai a flying start, decimating Bernadatte in the opening Women’s Singles. Taking advantage of an off-colour opponent, Petrissa raced away to a 5-2 lead in the opening set, and then bagged six straight points to pocket it 11-5.

A similar script followed in the second set too, with Solja wrapping it up 11-4 to the dismay of Bernadatte.

The Romanian, however, recovered in the final set, fetching a crucial point for Delhi. Down 0-2, she clawed her way back to take a handy 8-5 lead before sealing it 11-9.

In the opening Men’s Singles, Tiago came up with an inspired performance, walloping the higher-ranked Delhi captain Sathiyan 11-6, 11-7, 11-9.

World No. 71 Tiago showcased an array of shots to leave Sathiyan scampering around the table. Sathiyan struggled to find his rhythm, allowing Tiago to open up a 4-1 lead in the first set. The Portuguese made it 8-3 and then 11-6, to give Chennai the first whiff of a big victory.

The second set saw some amazing exchanges, with Sathiyan relying on his quickness near the table to extract points. Tiago was, however, quick on his feet and had answers to almost everything thrown at him. He won the second set 11-7 and the last one 11-9.

An ecstatic Tiago did a Sharath, jumping over the side boards to celebrate his tie-winning effort.

Sharath and Petrissa were in a different league in the Mixed Doubles, picking up points almost at will. Sharath played calmly, cutting down on unforced errors to make it easier for the pair.

Sathiyan and Bernadatte simply had no weapons left to fight back into the contest, perhaps still recovering from the thriller two days back. They lost 7-11, 2-11, 3-11 to allow Chennai Lions to roar in delight.