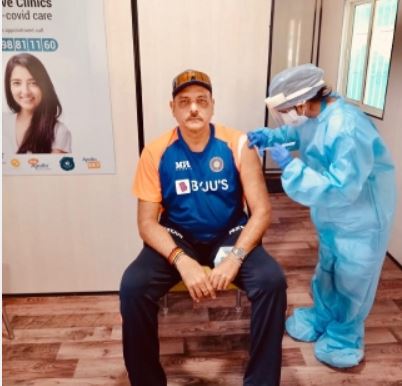 Ahmedabad: India head coach Ravi Shastri on Tuesday said that he received his first dose of the Covid-19 vaccine. Shastri, 58, got vaccinated here, where he is with the Indian team for the Test series against England.

“Got the first dose of COVID-19 vaccine. Thank you to the amazing medical professionals & scientists for empowering India Flag of India against the pandemic Extremely impressed with the professionalism shown by Kantaben & her team at Apollo, Ahmedabad in dealing with COVID-19 vaccination,” Shastri tweeted on Tuesday along with an image of him getting the jab.

India’s vaccination drive entered its third phase on Monday in which coverage was expanded to include individuals aged above 60 and those over 45 with comorbidities.

It is yet to be confirmed if the rest of the Indian team got vaccinated as well.

India faces England in the fourth and final Test of the series at the Narendra Modi Stadium in Motera from March 4. The hosts lead the series 2-1 after their 10-wicket win over England in Motera in the third Test which concluded in just two days.

The result ended England’s chances of qualifying for the World Test Championship final which is slated to be held at the Lord’s Cricket Ground in London from June 18. India, meanwhile, need to avoid defeat in the fourth Test to qualify for the final for which New Zealand have already qualified.

The Test series will be followed by a five-match T20I series that will be held at the same venue from March 12.