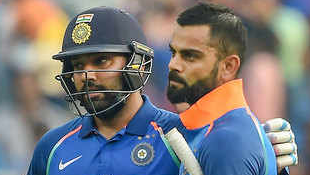 New Delhi: Former Pakistan pacer Shoaib Akhtar has lashed out at the critics who trolled him for praising Indian cricketers Virat Kohli and Rohit Sharma.

While reviewing the performance of both Pakistan and Indian cricket teams, Akhtar recently praised Kohli and Rohit, something that has not gone down well with Pakistani cricket fans.

The former fast bowler asked his critics why he shouldn’t laud Indian players as they were the best in the business in the current era.

“Why should I not praise Indian players and Virat Kohli? Is there any player in Pakistan, or all over the world, which comes close to Kohli? I don’t know why people are angry; they should go look at the stats first before criticising me,” Akhtar was quoted as saying by Cricket Pakistan.

He further said people should check the statistics if they have any doubts about Kohli’s abilities. “Kohli has 70 international hundreds right now. Who else has this many hundred right now in international cricket? How many series has he won for India? Should I not praise him then?” Akhtar added.

“This is very strange. We all can see clearly he is the biggest batsmen in the world. He and Rohit Sharma are performing all the time. Why shouldn’t we praise them?”

IPL 2020: KXIP have balanced squad and will do well, says Anil Kumble