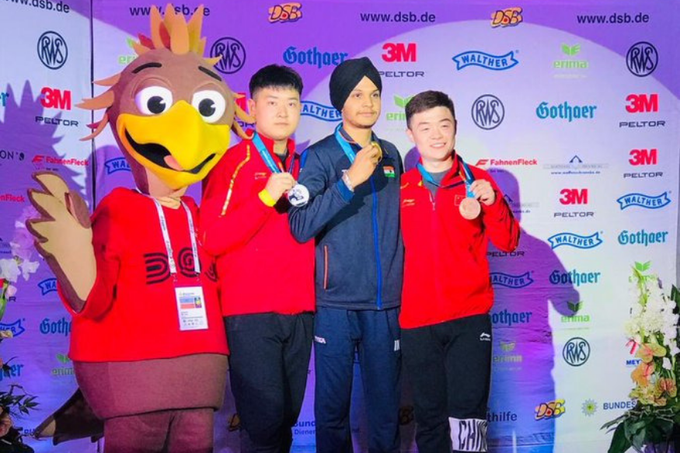 It was India's ninth gold in the competition.

Suhl (Germany): Sarabjot Singh shot 239.6 to bag the men’s 10m air pistol gold in the ISSF Junior World Cup here on Thursday. This was the country’s ninth gold at the meet.

His effort of 239.6 in the final also meant that India won a medal in both the Men’s and Women’s 10M Air Pistol, with 14-year old Esha Singh winning silver the women’s event on Wednesday.

After six days of top class shooting and with one more day to go, India remain on top of the medal standings with nine gold and silver medals each to go with four bronze medals for a total of 22 medals.

China is giving India a stiff fight and with five more finals left, are lying second with seven gold and silver medals and six bronze medals for a total of 20 medals.

Many congratulations to #SarabjotSingh for winning the gold medal in the men’s 10m Air Pistol at the @ISSF_Shooting Jr. World Cup with a score of 239.6.👏🏻🎉

Sarabjot, who had earlier in the year struck gold in the same event at the Asian Championships in Taoyuan, was the only Indian to qualify for the final with a score of 575, finishing fifth in qualification.

In the eight-man final, which followed, Sarabjit had a sedate start staying in third or fourth position before picking up pace from the seventh shot of the 24-shot final.

He had stiff competition from his Chinese opponents in particular as he let a healthy lead in the middle stages get narrowed down with an 8.4 for his 19thshot. Sarabjot however finished strong to win by almost two points in the end. China won silver and bronze.

Other Indian scores on the day:

Selectors should inform Dhoni of their plans, says Sehwag