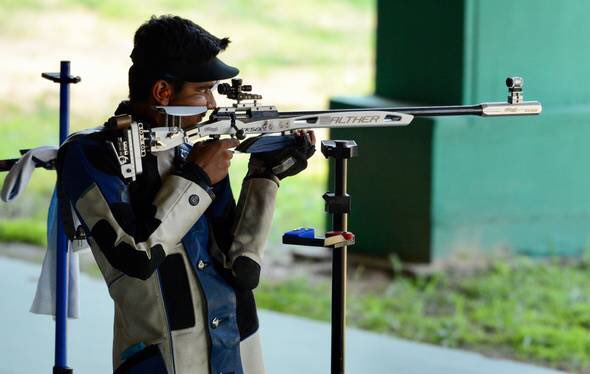 After Wednesday’s two gold, one silver and a bronze, India is at the top with 19 medals. The host country has so far won nine gold, five silver an equal number of bronze medals. The USA with three gold, two silver, and one bronze medal is at the second position.

At the 50 metres range, 20-year-old Tomar from Madhya Pradesh surprised one and all with his stupendous performance in the final. He shot 462.5 points to stay ahead of Hungary’s Istvan Peni who scored 461.6 to had to settle with silver. Denmark’s Steffen Olsen won bronze with a score of 450.9.

Sanjeev Rajput wasn’t so fortunate on Wednesday. Despite leading the chart in the qualification round with a score of 1172, he failed to find the rhythm in the final and finished sixth. Tomar, on the other hand, had shot 1165 in the preliminary round for the fifth position. Only the top eight enter the final of an event.

In the women’s 50m rifle 3-position, Indian shooters were off colour and failed to enter the final. Tejaswini Sawant shot 1164 to finish 12th while Anjum Moudgil was 16th with a score of 1162. Sunidhi Chauhan, the third Indian in fray, shot 1161 to finish 17th.