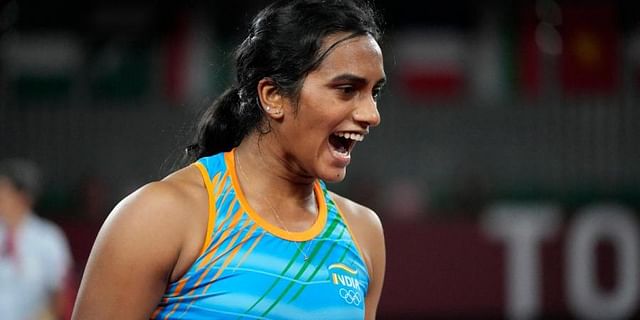 Singapore: Double Olympic medallist shuttler PV Sindhu pulled off a thriller to advance into the semifinal, but her teammates Saina Nehwal and HS Prannoy suffered heartbreaking defeats in their respective events in the Singapore Open Super 500 Tournament here on Friday.

Third seed Sindhu overcame a strong challenge from Han Yue before getting the better of her Chinese rival 17-21 21-11 21-19 in a battle lasting more than an hour to book her first semifinal berth since the Thailand Open in May.

Sindhu will next face unseeded Saena Kawakami, the Japanese world No.38, who caused an upset by eliminating sixth seeded Pornpawee Chochuwong of Thailand 21-17 21-19.

With Sindhu being the only Indian in fray now, it remains to be seen if the former world champion is able to make it all the way in the last event before the Commonwealth Games in Birmingham.

The Indian star boasts of a 2-0 head-to-head record against Saina.

Sindhu now leads 3-0 against the Chinese on head-to-head.

London Olympics bronze medalist Saina Nehwal, who showed signs of her silken touch in a superb win over Chinese world No.9 He Bing Jiao in the quarters, squandered a game lead to go down 13-21 21-15 20-21 against left-handed Japanese Aya Ohori.

The 32-year-old veteran Indian failed to convert her match points twice to hand over the tie to her Japanese opponent.

In-form Prannoy also showed promise and won the first game by nine points but Kodai Naraoka levelled in the second game before sealing it 12-21 21-14 21-18.

Prannoy put up an incredible battle in the decider when he bounced back from being 7-18 down and had eight straight points to make a match out of Naraoka.

From being 15-20, Prannoy saved match points and stretched it further, only to go down in a battle lasting 63 minutes.

Earlier in the day, the world No.7 Sindhu found the going tough early in the first game as Han was clinical with her placement and drew the first blood, but the Indian bounced back strongly to win the second and seal the issue in 62 minutes.

World No.19 Han had it easy in the first game after racing to 11-9 in the interval as Sindhu struggled with her defence.

The Indian bounced back in the second and took a three-point lead in the mid-game interval.

Sindhu extended her lead with a perfect cross-court winner and clinched the second game with seven points on the trot.

It turned out to be a thriller in the end as Sindhu, who found herself in familiar territory trailing 8-11 and then 9-14 in the decider, produced some fine rallies.

Sindhu showed great resilience to come back and level it at 14-all with five points in a row.

It became 19-all before Sindhu sealed it in her favour.

Indian doubles pair of MR Arjun and Dhruv Kapila also stretched second seeded duo of Mohammad Ahsan and Hendra Setiawan of Indonesia but failed to finish and lost out 10-21 21-18 21-17.