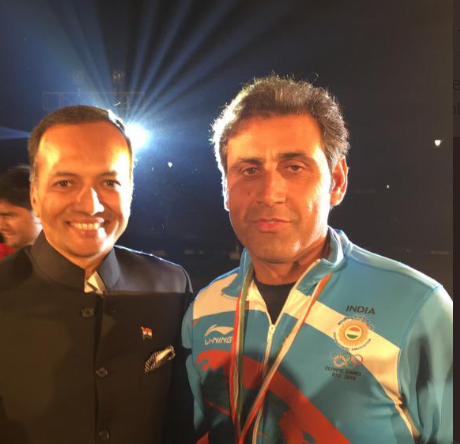 New Delhi: Two-time Olympian and India’s shining light in Skeet shooting, Mairaj Ahmad Khan, won the country’s and his first ever individual gold in the event, shooting 37 hits out of a possible 40 in the final at the ISSF World Cup Changwon 2022 in Changwon, South Korea on Sunday.

Talking about his success, gold medalist thanked Naveen Jindal who provided support to Mairaj during COVID times and further.

“I want to dedicate this medal to Naveen Jindal and to my countrymen. He had the belief in me that I could still win and today I have won this because of his support,” Mairaj said.

. @MPNaveenJindal has been a great help,specially in these covid times. Our Indian sports auth had given up on me but he had faith in me & helped me out in this odd situation. As all can witness it’s been a Historic Win & First ever GoldMedal for India in Shotgun Skeet Discipline pic.twitter.com/tNmBSf58S0

Congratulations @MairajKhanOLY on winning the Gold Medal🥇at the #ISSFWorldCup , becoming the first Indian to win the individual WC Gold in skeet shooting.

We are privileged to have supported you in your quest to bring glory to the nation.#ShootingWorldCup pic.twitter.com/5ECZgNxr1Y

It may be recalled that Mairaj had lost the gold in the shoot-off in the World Cup in Rio in 2016, when he won the silver, his last individual medal in a World Cup.