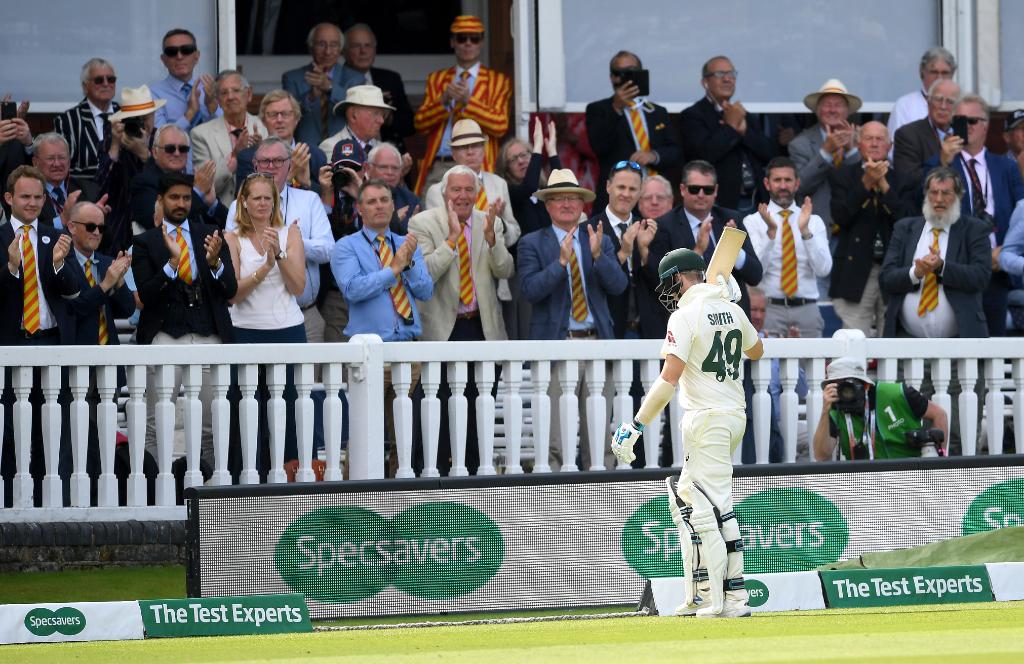 London: Steve Smith waged a lone battle, survived a deadly bouncer from Jofra Archer which forced him to retire hurt, came back and helped Australia not lose sight of England’s first innings score before Pat Cummins and Peter Siddle set up a victory bid, even as the hosts managed to take a 104-run lead at stumps on Day 4 of the rain-affected second Ashes Test at Lord’s on Saturday. current sports news cricket news

Australia, who were tottering at 102/5 at one stage in reply to England’s first innings score of 258, were bowled out for 250 with Stuart Broad returning best figures of 4/65.Smith fell eight runs short of his third consecutive hundred as he was trapped in front by Chris Woakes on 92 from 161 deliveries in which he hit 14 boundaries.

Woakes took three wickets for 61 runs and Archer grabbed two giving away 59 as England once again got past the entire Aussie batting except Smith who seemed to be in a league of his own. current sports news cricket news

In their second dig, England”s star pair of opener Jason Roy and skipper Joe Root were sent back by Pat Cummins (2/16) for 2 and first-ball duck respectively in two successive deliveries of the 5th over. current sports news cricket news

Another fascinating day of Test cricket between England and Australia!

Advantage Australia or is a draw on the cards?#Ashes pic.twitter.com/4pGiXZRX34

England found themselves in a spot of bother at 71/4 after Peter Siddle (2/19) turned back the clock to remove in-form Rory Burns (29) and Joe Denly (26) before England’s World Cup final hero Ben Stokes (16 batting) and Jos Buttler (10 batting) steadied the ship. England were 96/4 in 32.2 overs at close of play, leading by 104 runs with a da’s play remaining. current sports news cricket news

Earlier, it was all about Smith’s fightback. The former Australia skipper was sent reeling to the ground by an Archer bouncer threatening to cut short a masterclass knock as he was forced to retire after lunch.

Smith was batting on 80 from 152 balls when in the 77th over a delivery by Archer hit him on the unprotected part of the neck. The medics ran into the middle from both sides, as the England players rushed to the former Aussie skipper immediately.

As Smith lay on his back before slowly getting back on his feet, he looked dazed. The medics forced him to leave the field with Australia at 203/6, still, some way behind England’s first innings score of 258.

Smith walked back to the pavilion to loud applause after helping his side out of a hole as he did in the first Test. At the crease were Cummins with Siddle joining him. current sports news cricket news

Soon Smith, who at the outset did not want to leave the field, walked back but this time he was not as composed as he was before the knock, leaving a straight delivery from Woakes which hit his pads and he was plumb.

Smith started walking only to stop for a desperate review which did not help his cause. Cummins fought hard for his 20 off 80 balls (3×4) as the Aussies fell eight runs short of England’s total, which at one stage looked impossible.

Just after lunch, Aussie skipper Tim Paine was out for 23 just, Archer removing him. Archer then bowled an inspired spell of fast bowling few can match at this level to even trouble Smith. current sports news cricket news

Nathan Lyon scored 6 while Josh Hazlewood remained not out on 3. This was Smith’s seventh consecutive Ashes knock of 50-plus, a record he now holds outright after bettering Mike Hussey”s achievement of passing 50 in six straight digs against England. current sports news cricket news