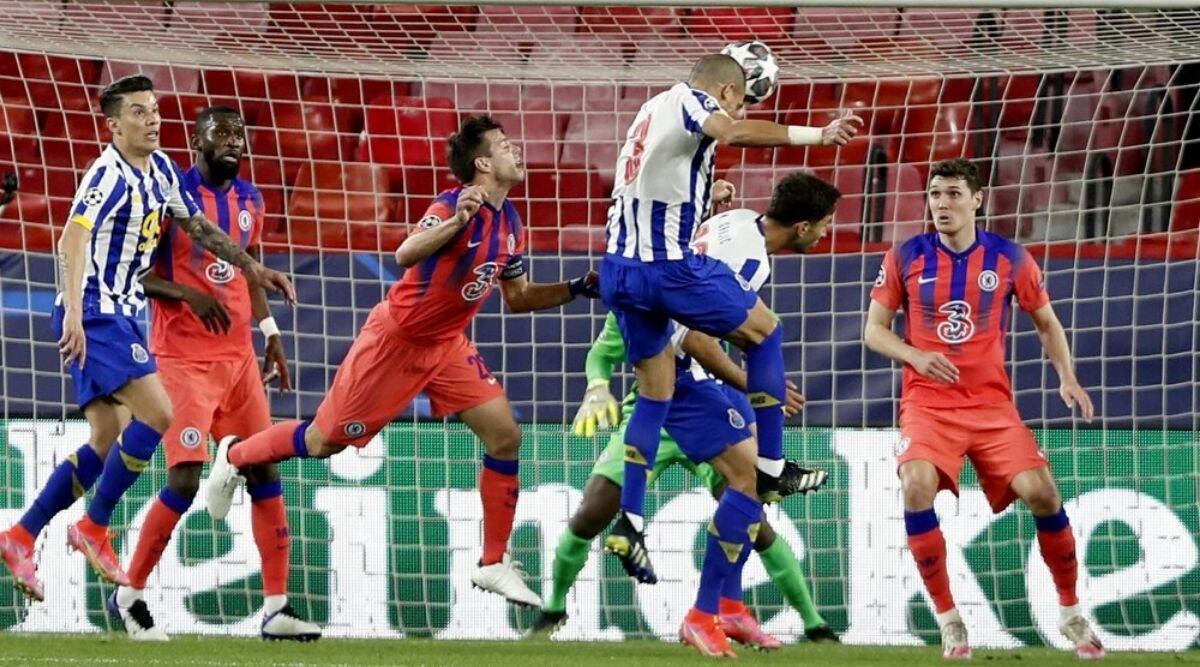 Seville: Solid defensively and precise in attack, Chelsea took a big step toward returning to the last four of the Champions League by defeating Porto 2-0 in the first leg of the quarterfinals on Wednesday.

Mason Mount and Ben Chilwell scored their first Champions League goals to give Chelsea a great chance of making it to the semifinals for the first time in seven years.

Mount scored after a nice turn past a defender at the edge of the area in the 32nd minute and Chilwell added the second following a blunder by Porto’s Jesús Corona in the 85th. The goals came off the only three attempts on target by Chelsea in Seville, where the game was played because of travel restrictions related to the coronavirus pandemic.

“We knew it was going to be a tough game,” Mount said. “We know how hard they are to play against. We kept going and secured a good win, but that’s only half the tie. The job’s not done, they’re going to fight next week and we’ll have to give our all again.”

Next week’s second leg will also be played at Sevilla’s Ramón Sánchez-Pizjuán Stadium. Porto was considered the home team on Wednesday.

The winner will face either Real Madrid or Liverpool. Madrid beat Liverpool 3-1 at home in their first leg on Tuesday.

In the other quarterfinal on Wednesday, Paris Saint-Germain won 3-2 at Bayern Munich.

After eliminating Cristiano Ronaldo’s Juventus in the round of 16, Porto entered the last eight looking to upset another top European team.

It was an even start in Seville but Porto appeared to be taking control before Chelsea opened the scoring with the team’s first attempt on goal. The 22-year-old Mount received a pass by Jorginho and swiveled away from a defender before entering the area and firing a low shot into the far corner to become Chelsea’s youngest scorer in a Champions League knockout game.

“It was about time it came,” Mount said. “I’ve been waiting patiently, it was a good pass by Jorgi and I was very happy with it. I’m always working on my finishing, it’s a part of my game I can improve on.”

Moments after Christian Pulisic hit the woodwork from inside the area, Chilwell sealed the victory by taking advantage of a mistake by Corona shortly after the Porto player had moved to the back line. He let the ball slip away and Chilwell pounced on it and went past goalkeeper Agustín Marchesín before finding the open net.

“It is difficult to accept this result because we had eight shots in the first half to their one,” Porto midfielder Marko Grujic said. “We showed that we have quality and in the second leg we’ll try to turn the tie.”

Porto finished the game with twice as many attempts as Chelsea, 12-6, but struggled to get close to the goal. Chelsea’s Edouard Mendy became the first goalkeeper to keep seven Champions League clean sheets this season.

“It was a tough match against a strong Porto side,” Chelsea coach Thomas Tuchel said. “There were many moments where we suffered, but we accepted it. That’s the way it is at this stage. The spirit was good and it’s an excellent result.”

Chelsea is playing in the last eight for the second time since winning the European title in 2012. It last made it to the semifinals in 2014, losing to Atlético Madrid.

Porto was a quarterfinalist in 2019, losing to eventual champion Liverpool. It is trying to make it to the semifinals for the first time since winning the competition in 2004.

Tuchel made five changes to the team that lost 5-2 to relegation-threatened West Bromwich Albion in the Premier League on Saturday, a result that ended the team’s 14-game unbeaten streak. Thiago Silva was among those who didn’t start against Porto.

Chelsea had seven straight clean sheets before the loss on Saturday.

Porto was without midfielder Sérgio Oliveira because of a yellow card suspension. He scored two goals to help Porto get past Juventus in the last 16, including one in extra time. The Portuguese club also was without Mehdi Taremi, who was sent off in the second leg against Juventus.

Veteran central defender Pepe made his 103rd Champions League appearance, moving him level on the all-time list of Portuguese players with Luís Figo. They both trail leader Cristiano Ronaldo, who has 176 appearances.