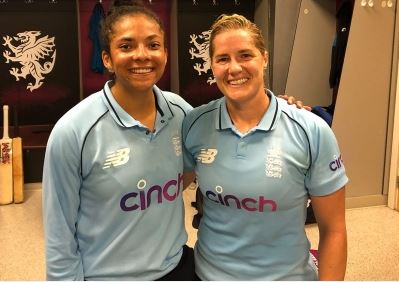 Taunton: All-rounder Sophia Dunkley, who earlier this month became the first Black woman to play Test cricket for England, hammered unbeaten 73 off 81 deliveries and shared an undefeated 92-run partnership for the sixth wicket with Katherine Brunt (33 not out) to help England women’s team beat India by five wickets in the second ODI here. The win helped the host take an unassailable 2-0 lead.

England women had won the first ODI by eight wickets.

India, who were all out for 221 in 50 overs after being put into bat, began well by reducing England to 92 for four. They managed to remove the stars of the first match Tammy Beaumont (10) and Natalie Sciver (19) early.

However, Sophia powered them to the target, hitting five fours and a six as the Indian bowlers struggled to get rid of her.

The visitors had got off to a flying start with openers Smriti Mandhana (22) and Shafali Verma (44) adding 56 before a loss of three quick wickets, including the close stumping of Shafali, put them on the back-foot at 77 for three.

Harmanpreet Kaur (19) and Mithali (59 off 92 balls) then added 68 runs for the fourth wicket before Harmanpreet fell. As wickets kept tumbling around her, Mithali remained the lone batter standing.

India putting themselves under pressure because of occasion: Curtly Ambrose