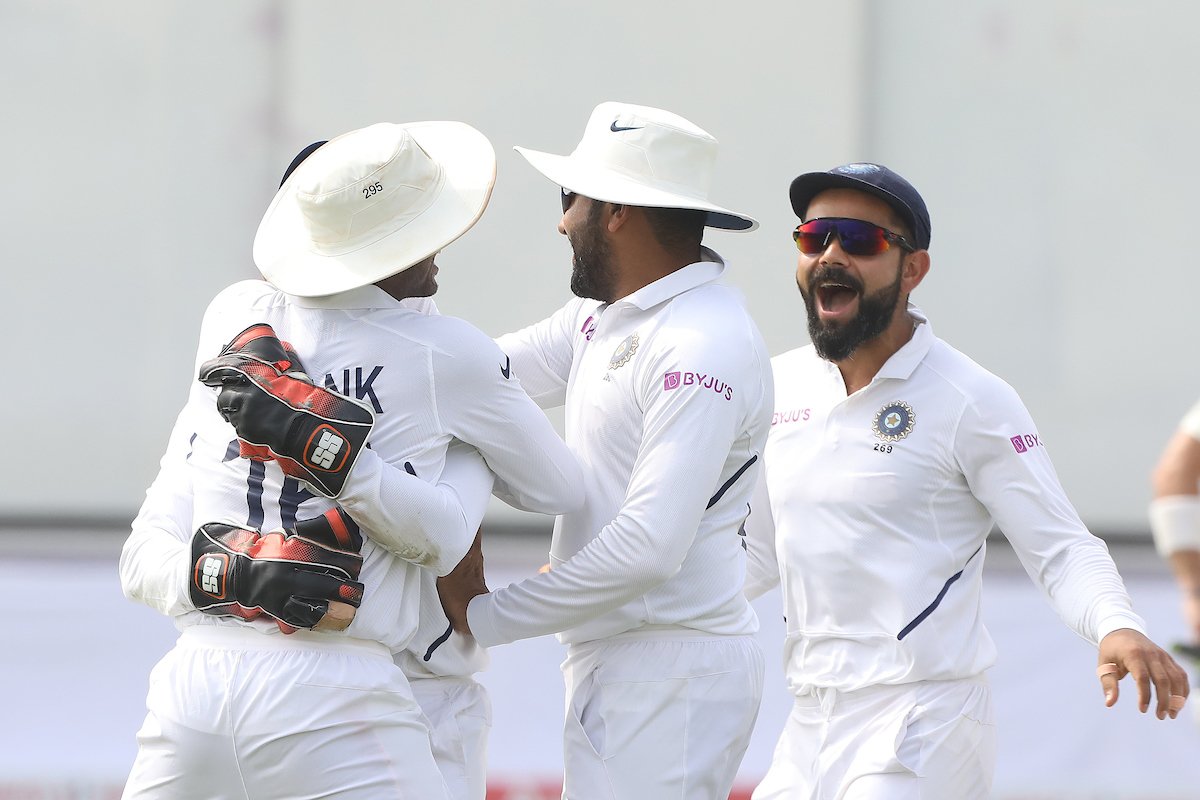 Pune: India are well on course for an innings victory after their bowlers blew away the South African top-order, leaving the visitors reeling at 74 for four in their second innings after following-on on the fourth day of the second Test, here on Sunday.

The South Africans are still trailing India by 252 runs at lunch after starting the second innings 326 runs in arrears.

The stodgy Dean Elgar (48 off 72 balls) put up some stiff resistance before Ravichandran Ashwin (2/8 in 8 overs) snuffed him out, in what was a decisive blow for the Proteas just before lunch.

After going wicketless in the first innings, Ishant Sharma (1/17 off 5 overs) struck with the very second delivery of the morning, a full-length in-dipper that struck Aiden Markram’s pads (0) and umpire Nigel Llong raised his finger.

After a long discussion with non-striker Elgar, Markram didn’t opt for the review but TV replays clearly showed the ball was missing the leg-stump. The opener thus had the ignominy of bagging a ‘pair’ in this Test.

However it was Wriddhiman Saha’s superb keeping skills that had all those present on the edge of their seats, as he showed why he is so highly rated for his glovework.

On the third morning during South African first innings, poor Theunis de Bruyn (8) had suffered trying to play an expansive cover drive off Umesh Yadav (1/14 off 5 overs) that Saha had plucked from thin air in-front of the first slip.

On the fourth morning, De Bruyn tried playing a delicate glance after Umesh had drifted on the pads. To his horror, he saw an airborne Saha pull off an acrobatic stunner that left everyone on the edge of their seats.

Elgar and skipper Faf du Plessis (5 off 54 balls) added 49 runs and were ready to show patience, especially the skipper, who was presenting dead bat.

However, the ultra defensive tactic didn’t work for a lengthy period as Du Plessis got out trying to drive an Ashwin off-break. The bat-pad inside edge kept low but Saha’s sharp reflexes meant that he pouched it on the fourth attempt.

Elgar, who lost a bit of concentration, tried to play a lofted shot but didn’t get his timing right as Umesh ran back from his mid-off position to take a fine running catch.